As I pass the midway point of my semester here in Chicago (still in shock that it’s over halfway done!) my roommate and I have sort of realized it’s been a while since we had a “normal” weekend. What I mean by that is basically that the last 4-5 weekends I’ve either gone out of town (I went to Philly and back to Hope for homecoming), had friends visiting, or was deathly ill with the flu. Excluding the whole flu thing, these weekends have all been super fun! But it also had both of us missing the beginning weekends when we had no real plans and could just explore and enjoy the city however we wanted. So this weekend I had my long awaited “normal” Chicago weekend.

Except for the fact that it really wasn’t normal. It was Halloween weekend and the Chicago Cubs are playing in the World Series. So the city was absolutely insane. Being here for all the baseball hype is so surreal. I have loved experiencing the crazy energy and love that the city has for this team! With so much happening this weekend I definitely felt the pressure to do as much as I could and I think I did a pretty good job!

On Saturday we lucked out with some seriously amazing weather. I took advantage of this insanely warm weather by taking a short run down to the beach. I love being so close to Lake Michigan, it makes me feel like I have a little bit of home with me here in the city.

After that I changed and got ready for this event called Soul Pose. My friend, Maddie, encouraged me to sign up and I’m so happy that I did! Soul Pose prides itself on being “the happiest yoga class in the world” and with bubbles, neon black lights, body paint, and crazy costumes, it really is! Because we arrived a little late (tip to the wise: add time to your public transit commute on these crazy weekends) so we didn’t totally get to experience the body paint, but we tried to do a little before walking into the class. 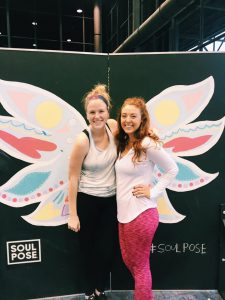 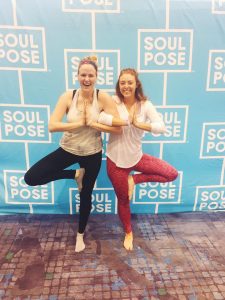 After an hour of happy yoga, I made my way home for a quick change and then it was out to Wrigley Field to experience some Cubs craziness! My friend, Sami, invited me to join her at a friends apartment in Wrigleyville to watch the game. The apartment was so close to the field we could actually see the ballpark lights from the porch! It was super cool. Getting down to Wrigleyville was a little less cool, however, and I was very grateful that she met me outside the train station as it was totally nuts down there. We managed to get a couple photos outside the stadium though so it was definitely worth the crowds 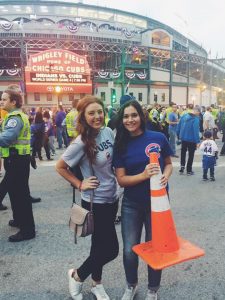 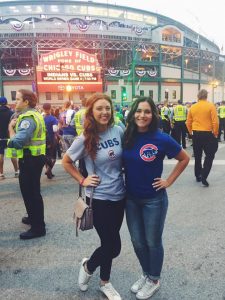 Despite the less than ideal outcome of the game, it was still fun to be by the field and experience the craziness of a World Series game.

After the game I made the trek home and got to see some of the Halloween festivities too. Our apartment is right around the corner from a strip of several different bars that were all participating in a Halloween bar crawl. So on my way home I got to see a myriad of different costumes including: a middle-aged man dressed as the Tooth Fairy and his wife, the tooth, a giant T-Rex, and a very elaborate Jessica Rabbit.

Overall, it was a super fun Chicago weekend, even if it wasn’t exactly “normal.”