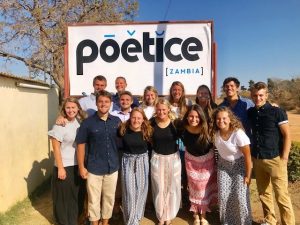 Hi this is Sam Vree and Jo Cook. This morning, several of the team members woke up for the sunrise. After watching the sunrise, the rest of the team joined for breakfast before the Poetice crew showed up. After breakfast, some of the team went to the prayer room for a time of individual prayer which was a great time to reflect on our week here at Poetice. After prayer and before church, John, one of the leaders at Poetice, led us around their property showing us their vision for the years to come.

Our service was amazing and unlike anything most of us have experienced. We spent time in worship to open the service. The songs we sang had us clapping, jumping and dancing around. I, Sam Vree, had to teach Jake how to clap on rhythm. After the opening songs, the service transitioned into a baby dedication. Parents from the church brought their kids to church, and several Poetice staff members spoke prayers over the families. After the dedication, we ended the service with a couple more songs and then transitioned into a church picnic.

The church picnic consisted of the members eating, playing sports and relaxing on the church base. The children were full of energy running around, getting their faces painted, a stickers table, nail painting, and playing different games. We had dodgeball, volleyball, soccer and basketball games going. After an hour of playing and relaxing, we ate together as a congregation and then continued in the festivities. John told us it was their first time having a day quite like this after church, and they were really happy with how it went.  It was really fun for all of us. The church day was perfectly balanced with times for worship and fellowship.

After the picnic, several of the mamas stuck around for water filter demonstrations. We gave away several more water filters, and showed them how to set them up on the Poetice base. We then followed the families into their community to their wells filled with unclean water. After demonstrating that we were willing to drink their dirty water after it passed through the filters, the mamas were amazed and appreciative.

On our way back through the community, we stopped at a soccer game. We supported two of the soccer teams that were at our camp, and seeing them in action was really great. While there, we had a giant dance circle with kids who were there to watch the game and several of our team members were called into the spotlight. The children on the sidelines were a blast to play with, and saying goodbye to all of them for the final time was heart-breaking.

Our final Zambian dinner was chicken and nshima. Poetice staff wanted to celebrate our last night being on the base and we had ice cream for dessert and a campfire as a place for worship. During our worship time at the campfire, people in the same sports split up and talked about worries or anxieties that might be holding us back from a true relationship with God. Many found this time to be important talking to team members. After worship, we went into debrief and all spent time together reflecting on our time in Choma and how it has impacted us before going back home.

Answer: A tomato
Question: What do people say about the restaurant on the moon?