It may not be college basketball season, but here in the Division of Public Affairs and Marketing, we are celebrating a special kind of hoops-related victory.

“The Rivalry” — the highly anticipated showdown on the court between Hope College and Calvin College (now Calvin University) — has been called one of the best in the country by ESPN. And last month, a special game-day program for the 200th Rivalry earned an especially fitting honor: Best in the Nation. 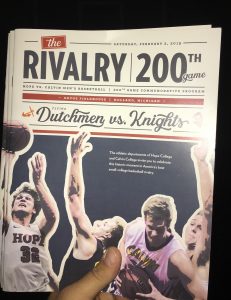 It all started last year, when members of the Public Affairs and Marketing team pitched an idea: to create a unique piece commemorating the milestone match-up between the Hope and Calvin men’s basketball teams, taking place Feb. 2, 2019 at Hope’s DeVos Fieldhouse. The idea turned into a reality, resulting in a sharp 24-page piece that perfectly captured the high caliber of the competition. 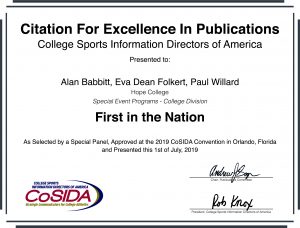 Kudos to the following members of the Hope College Public Affairs and Marketing team, whose collaboration yielded the award-winning program:

I am so proud to work with such a creative, talented colleagues. Congratulations to everyone who helped earn this well-deserved victory!   Hope and Calvin have been playing each other in men’s basketball since 1920. After 201 games, the two teams are separated by just five wins and 98 points. Check out the 2019-20 Rivalry schedule!