Thank you for your support in making the Hope College website accessible to all of our visitors! Please don’t hesitate to let us know if you have any questions.

You may be aware of the ongoing efforts to address website accessibility as it pertains to the Hope College website (hope.edu) and our other web properties. In addition to the new Web Accessibility Policy and Web Accessibility Training recently offered, we will soon be introducing a revised design and other enhancements to the Hope website to address several issues related to color contrast and further optimizing the site to be used more effectively by screen readers and other assistive technologies.

Tip: if you notice a hope.edu webpage not loading correctly, try clearing your browser’s cache

You’ll notice these design improvements taking place in the coming days and weeks. Please note that web content editors will not be required to take additional steps to implement these updates to your department websites, as long as your site is using the new template. If you do notice something that does not seem to be functioning correctly, please let us know right away.

We always welcome your questions and feedback as we work to make the Hope website an inclusive and accessible space for all of our visitors.

In celebration of our new summer office hours (Hooray! Thanks Human Resources!), we created a simple office hours sign and thought we would share it with the rest of campus! Feel free to print it and hang it outside your office as necessary.

As you may have heard, we’ve implemented a new Hope College Web Accessibility Policy. Additionally, we are offering web accessibility training this summer to educate those of us who are involved in editing Hope webpages. We strongly encourage our web content editors to attend.

Our first Web Accessibility Training session will be held on Thursday, August 16 from 10:30 a.m. – 12:00 p.m. at the Haworth Center Ballroom I & II with a free lunch to follow.

The training will be led by Jeremy Abrahams who is a senior developer, UX strategist, and accessibility specialist from Mighty in the Midwest in Grand Rapids.

If you are unable to attend, a video recording and presentation materials will be made available.

Please RSVP using this form to let us know if you’ll be attending or if you’d like the video and materials sent to you.

If you have student workers who work on the website and are available, you are welcome to encourage them to attend as well.

We look forward to this time of learning, please let us know if you have any questions at web@hope.edu.

We’re writing today to give you an update on website accessibility as it relates to the Hope College website, hope.edu. Web accessibility refers to the inclusive practice of removing barriers that prevent people with disabilities from interacting with or accessing websites, so that all users have equal access to information and functionality. Hope College (and other colleges and universities) are required to have accessible websites, which is enforced by the U.S. Department of Education, Office for Civil Rights.

Hope College is required to develop and post a Web Accessibility Policy, outlining a technical compliance standard and describing how Hope will ensure accessibility of our web content. This email serves as notification to the campus community of this policy.

View the Hope College Web Accessibility Policy on the college policy page or feel free to contact Jason Cash in Public Affairs and Marketing for a hard copy of this information.

Later this year we will begin to offer and require web accessibility training for all campus web content editors. We will provide more information about that in the coming months.

Please feel free to contact us with any questions or concerns.

That is my goal in this job — to shape the players to be the best version of themselves and while we’re at it, help the team win a few games.” — Courtney Kust ’13

It’s a reality of team dynamics in the workplace: You have those who are natural coaches. You have those who are natural clutch players. And then, you have those individuals who are both — individuals who are able to rally the team, make the tough decision and call the play just as well as they are able to make the assist, take the shot and grab the rebound. The Public Affairs and Marketing Division is blessed to have that rare combination in Courtney Kust ’13, who serves as an assistant coach for the Hope women’s basketball team and an events and conferences manager for the Hope campus community.

Today, the Women’s Basketball Coaches Association named Courtney to its 2018 “Thirty Under 30” Class — a distinction that recognizes 30 up-and-coming women’s basketball coaches age 30 and under at all levels of the game.

Courtney’s coworkers know that she is a rock star. Now, the WBCA agrees, and we couldn’t be happier. We are really, really proud of Courtney… and we just have to boast a little because, well, we know she’s not going to.

Courtney leads with integrity, passion and commitment. She is determined and hardworking, and is never willing to give less than her all. In the Events and Conferences Office, Courtney develops and coordinates conferences and camps here at Hope. She also oversees student workers in the audio-visual booth for athletic events, summer housing events and first responders. On the court, Courtney assists Coach Brian Morehouse in leading a team of strong, focused athletes who, this year, finished their season with a strong run to the Elite Eight… #GoHope!

Last week, I was in a meeting that opened with a prayer called “Liturgy for Those Who Compete.” The prayer concludes with the following words:

Let me model what it is to be
one fiercely focused on, and invested in,
the drama at hand,
pushing myself always towards the goal,
and yet ever extending
a humility and graciousness
in keeping with my status
as your servant, O Christ.

As I heard those words, I couldn’t help but think of Courtney, who shared the following when she learned about the award:

“Coaching at Hope definitely has God’s fingerprints all over it. Never in a million years did I think I would be back at Hope, but the opportunity came and I couldn’t resist the chance to be a part of the women’s basketball program again. I have loved building relationships with the players and being a source of encouragement and positivity in their lives. That is my goal in this job — to shape the players to be the best version of themselves and while, we’re at it, help the team win a few games.”

Courtney, you are a clutch player for the entire Hope College team, and we are so grateful for everything you do to help us all become better versions of ourselves. Congratulations on this well-deserved honor! #FireUp!

In addition to our behind-the-scenes change to improve Open Graph tags, we also made a more noticeable change that some of you may have already seen on your websites.

As you may remember, Hope’s web pages have had the option to display in the right sidebar the most recent hope.edu/news press release associated with a department or office: 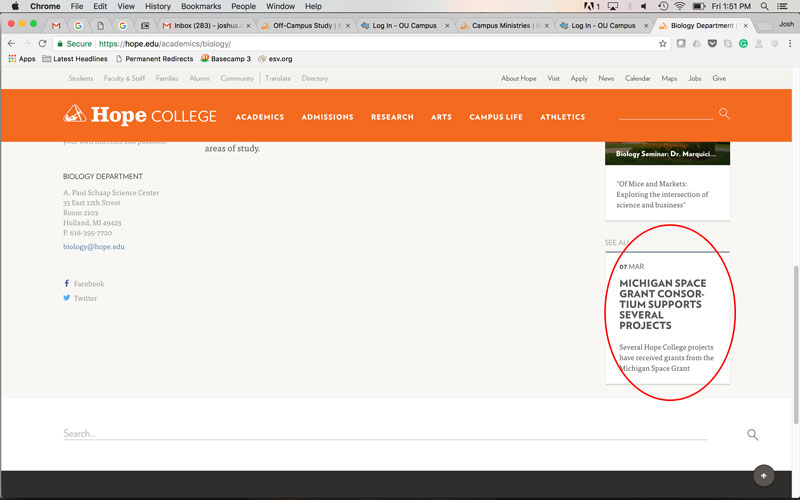 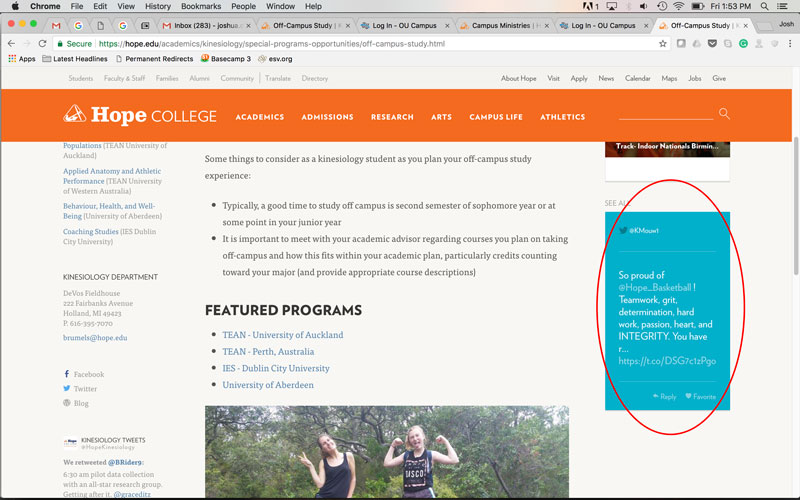 We hope that by expanding the potential pool of media items to draw from, this content will be more current and relevant to students, and will showcase the variety of content available on our news page.

A few things to note:

We’ve recently made a “behind the scenes” update to our hope.edu pages and sites within OU Campus that greatly improves the metadata code provided for open graph tags. Open Graph is a technology first introduced by Facebook in 2010 that allows integration between Facebook and its user data and a website. By integrating Open Graph meta tags into our page’s content, we can identify which elements of our pages we want to show when someone share’s a page on Facebook or Twitter.

By implementing this, Facebook no longer has to guess what image to pull when our pages are shared, for example.

The Open Graph protocol enables developers to integrate their pages into Facebook’s global mapping/tracking tool Social Graph. These pages gain the functionality of other graph objects including profile links and stream updates for connected users.

Cool, right? If none of this makes sense, all you need to know is our hope.edu web pages will look better when shared on social media sites like Facebook.

Thanks to our friends at the Academic Success Center for this great blog post “Do I Really Need to Caption My Videos?”

Spoiler alert: the answer is yes! Read the post to learn why.

See the 2018 and the inaugural issue of Spera, a new print and web publication focused on the research, scholarship and creative performance of Hope College faculty. Spera will be produced annually by the Office of Public Affairs and Marketing.

Themes in this issue include: Looking Back at the Reformation, the Fine Arts, Science on the Cutting Edge, Education and Vocational, Dimensions of Disability, Life in the Public Square and Faculty Books.