Touchdown! As in… on an airplane in Cuzco! The past few weeks have been filled with travel, climbing hills, picking some fruit here and there, and meeting lots of new people. A week and a half ago my study abroad program officially started in Lima, Peru, and for the past several days I have been taking coursework in Cuzco over research methods, Spanish, Quechua, and Peruvian/Spanish/indigenous history. Then today I left from Cuzco for a brief weekend visit to rural areas and certain archeological sites, including Ollanta and the Valle Sagrado.

But just a moment! Before I dive headfirst into my blogging career, I thought I would break the ice with a little food. Because after all, who doesn’t like food?

To the right, therefore, you can see our esteemed and exotic lemon pepper, whose flavor is slightly more tart than most. The locals consumed it with much frequency—albeit in its less slender variety—and primarily because we had a lot of them. Why is this important? First, because I hoped a chuckle would emerge from you, and second, because I spent three weeks of my month’s stay in Chile working on a lemon farm, none other! Many of the lemons—or limones, as we called them in Chilean Spanish—came in unique shapes and sizes, from the tamaño of a golf-ball to what could be mistaken for a small melon with fingers. It was a blast picking them, to say the least. 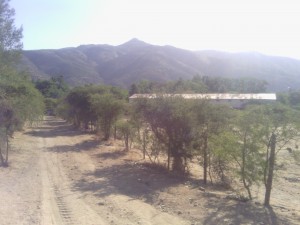 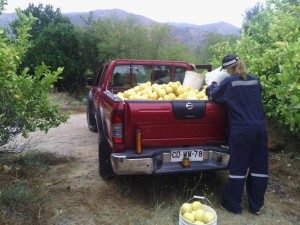 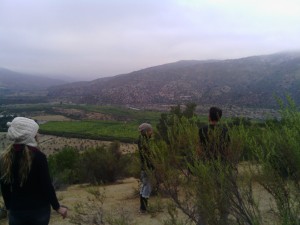 Beyond lemonade at just about every meal, these limones came in handy when preparing the national beverage, called Pisco Sour. A mix of lemon, eggwhite, sugar, and liquor, the drink also sparks a subtle rivalry, so I learned, as neighboring Peru claims it equally as its own!

As to a quick summary, my three-week’s stay in Chile was ironically filled with lots of Europeans, Australians, and Americans, who cooked their own usually veggie dishes. I would contrast that to my experience so far in Peru where there are far fewer veggie options, and a lot more of the animal is consumed, moreover, from heart to stomach to feet.

Ceviche too, raw fish soaked (and in this way “cooked” without heat) in a citrus mixture, is a Peruvian favorite. On my first try, I mistakenly ordered the “ceviche mixto”, which is to say that I had the pleasure of taking a stab (yes, pun intended) at octopus, squid, and a certain mollusk for the first time as well, raw in a ceviche bowl. Yum yum!

Pictures of what I eat will become a habit of mine to place in each blog going forward. Some will be more exotic than others, some may be main courses and others drinks or desserts, but regardless, my hope is to give a more personal feel to my stories; and hey, if you want to, these could always become ideas for your own kitchen! 😉

All that said, here I am, and here begins a great semester of study! Before I call it quits, wherever in the world I may be, I Hope you know the Flying Dutchmen are still first and foremost in my heart! Or to say the least, an eerily similar anchor can be found just off San Cristobal Hill in Santiago, and I saw it as the perfect opportunity:

On that note, stay tuned; much more to come!