After the IES trip was sadly over, I had the amazing opportunity to continue my adventures into Northern Zimbabwe to the global phenomenon of Mosi-oa-Tunya (meaning ‘the smoke that thunders’ in the Shona language or more commonly Victoria Falls!) 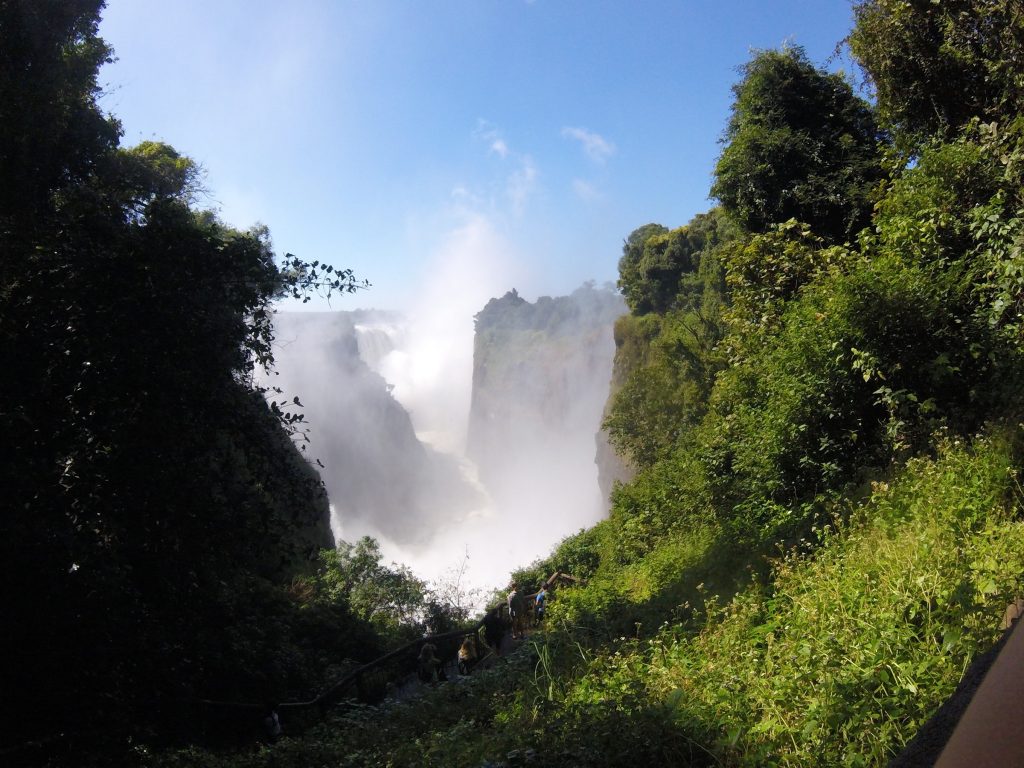 Victoria Falls is known for being one of the natural wonders of the world and the largest (widest) waterfall on the planet. The power of the falls during rainy season was observed from my plane ride in, as the mist reached towering heights.  Locals explained how the mist could become so strong that they would receive rain showers in the closest town located more than a mile away from the falls.

I was so excited to walk the scenic trail that contained 16 vantage points on the Zimbabwean side of the falls. 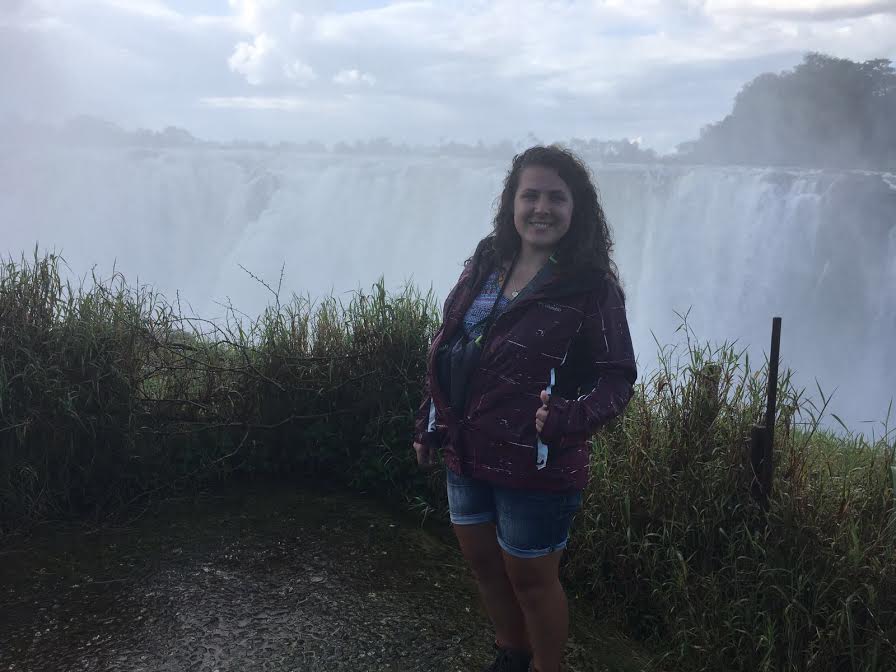 It was crazy to walk more than a mile to view the entire length of the falls.  Since it was the rainy season, the powerful falls created mist that resembled a torrential downpour.  I became soaked walking along the path as rain came from all directions. 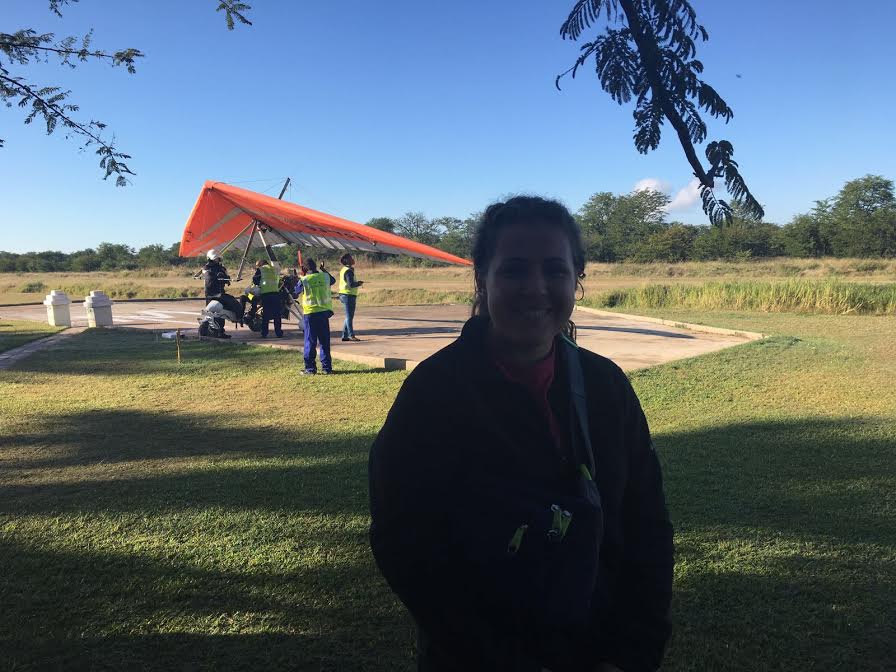 While the walk along the ridge of the falls was amazing, by far the best view was from the air.  I was lucky to experience this when I ventured into Zambia to catch a Micro-Light Flight over the falls 🙂 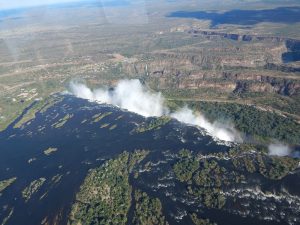 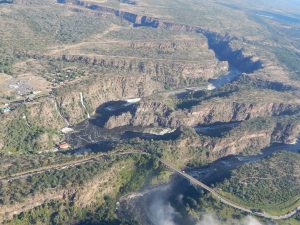 It was breathtaking to see the entirety of the falls, the snaking Zambezi River, and miles of green bush.  Additionally, it was fun to spot the elephants and hippo pods from above.  As we made our way back for landing, my pilot allowed me to steer the motorized plane 🙂 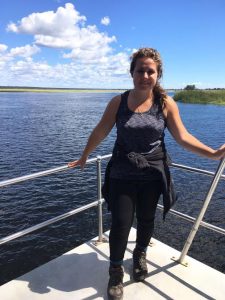 Our group transferred from Zimbabwe to Botswana for a camping adventure in the bush of Chobe National Park.  We arrived and began our day with a boat cruise on the Chobe, where it divided the countries of Botswana and Namibia.  The scenery was magnificent and the waters were alive with animal activity. 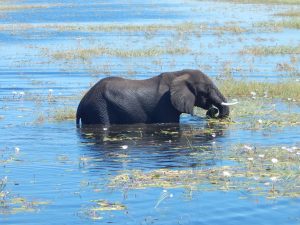 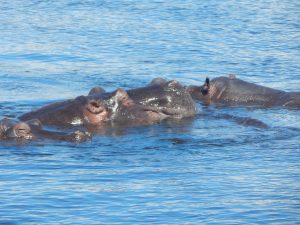 We neared a resting hippo pod and our driver explained how we needed to maintain a large distance since hippos have been known to flip boats.  We were lucky to view an elephant swim from the shore to snack on food in the marsh. 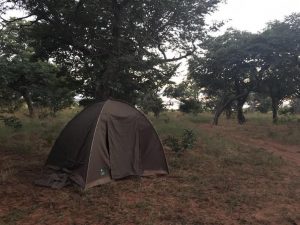 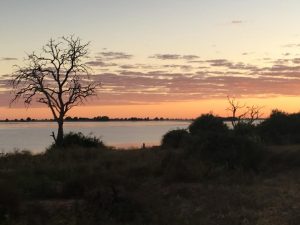 After our cruise, we transferred over to a safari vehicle to drive out to our campsite deeper in the park.  It was fun to view the animals in their natural habitat as we made our way to the camp for sunset.  Nearing our final tenting point, we saw a hyena and Kudu.  To make our experience more nerve wrecking we heard lions roaring in the distance as we had dinner around the fire.  Although frightening at times, it was surreal to fall asleep to the sounds of nature.  Our guide assured us that a lion’s roar can be heard from over 10 kilometers away so he thought we should be safe. 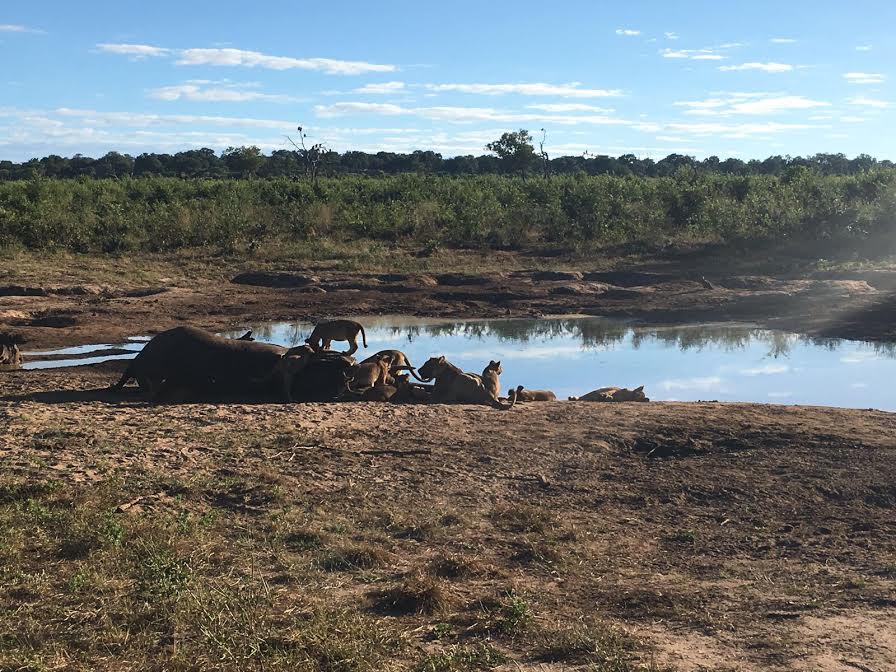 We woke early in the morning to search for the lions and unbelievable found them at a watering hole 🙂  They were maybe two miles from where we had slept, so crazy!  Sadly, the lions were attracted to the point by a deceased elephant.  Our guide explained how lone elephants were more prone to being hunted by prides.  Last nights roars may have been them taking the elephant down.  However, he also mentioned that poachers have been known to poison watering holes for easy kills; this also might have been the cause of his demise.

It was incredible to view the cubs interact with their moms.  As everyone was taking pictures, someones phone slipped out onto the ground.  The driver sneakily crept on the backside of the car to retrieve it.  He safely returned to his seat without the pride realizing he had gotten out of the vehicle.  It was only when we went to leave the scene that we spotted the two dad lions sleeping in the bush maybe ten feet from where the guide had stepped out!

The extended trip was a great conclusion to spring break 🙂