This past week I went on an excursion with my class to Savaii. The country of Samoa is made up of two big islands, and a few smaller ones. For the past month, I have been living on Upolu, the smaller but more populated island. Savaii is the big island to the northwest, with the small islands of Manono and Apolima between the two.

After an hour and a half bus ride and an hour-long ferry ride, we finally arrived in Savaii. Savaii is unbelievably beautiful, covered with thick rainforest and high volcanic peaks. Being less populated than Upolu yet much larger, it was made up of sleepy Samoan villages divided by long stretches of thick vegetation and natural scenery.

After getting adjusted, we went directly to the village of Manase where we stayed in the Tanu Beach Fales. If you ever come to Samoa, I recommend staying in a beach fale. A fale is a traditional open Samoan house. It is round and made wooden posts supporting the roof (in our case it was made of palm thatch). The fales then have palm blinds that may be pulled down in case of rain or for privacy. The most amazing thing about staying in a beach fale is that you are right on the ocean. We were situated not just near the beach, but literally on the beach. It was such an amazing experience to fall asleep to the sound of the waves at night, and to watch the sun rise up over the ocean in the morning.

Though our stay in Savaii was relaxing, it was not just a vacation. We took day trips around the island with a geologist from Australia named Warren. He was quite a character! I would never expect an 85-year-old man to be hiking with college students on lava fields (from 1905-1911 there was a large volcanic eruption on the northern coast of the island), or taking us to volcanic craters, but he did. In addition to lava flows we got to see ruins, Polynesian mounds (mounds built by ancient Polynesians for yet unknown reasons), blowholes (ancient lava tubes on the coast that spurt water high into the air), waterfalls, and we even got to make beautiful siapo (also known as tapa cloth, it is made out of the bark of the mulberry tree, pounded flat, dried and painted with natural materials–an art form very few are proficient in). 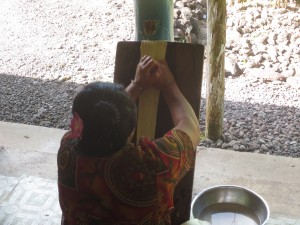 I got to learn so much about the natural environment of the Samoan islands, as well as take in some nice “r and r” on the beach. Overall, an amazing experience, and I hope to get back to Savaii before I leave Samoa.