Josh the Wandering Hedgehog has just returned from his field trip in the Peloponnese.  He has been very good at buying postcards, but very bad at budgeting.  I’m very tempted to speak about the Stadium at Olympia -site of the eponymous games, or of my recent trip to Mycenae.  Perhaps I’ll do that for next week, but instead I’ll just talk about things Byzantine, as the Hedgehog Bard is wont to do.

The town of New Sparta is, as an old Victorian traveler wrote, full of neat streets crossing at “right angles.” Built right after the war of Greek Indepence in the 1800s, it straddles the lush Eurotas Valley, site of Ancient Sparta. It’s a strange town; “This Is Sparta” shirts rub shoulders with lamp stores, stationery shops, and hotels named after Homeric heroes. Ours was, unsurprisingly the “Hotel Menelaion.”* My professor guided us through the ruins of the old acropolis outside of town, but as might be expected of the terse Spartans, we’ve got nothing. Mind you, they weren’t big on infrastructure, or writing, or civil liberties, so we saw very little above ground. The ruins, however, were situated quite neatly in an olive grove. Pretty things.

The Eurotas Valley, needless to say, has been inhabited for a while.  And it’s not hard to see why -flanked by massive mountains, and home to one of the most fertile river vales in fair Greece, it’s hard to find something not lovely about the place.  Which brings us to Mystra, the Byzantine city we visited the next morning.

The first thing a visitor notices are the oranges. Rows and rows of green orange trees rustle against the side of your bus as you wind up into the foothills of the Taygetus Mountains.  The mist has begun to clear out from the cliff tops, and the first red tiles of Mystra appear to their eye.** 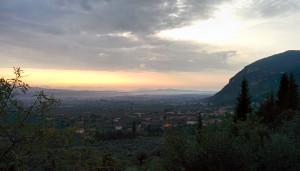 Professor Despina Iosef, our peppy Byzantine historian and guide, meets us at the gate.  I’m virtually palpitating in glee -I’ve been waiting for years to visit these sights: to, as Despina says, “to walk where emperors walked.”  Truly, it’s a treat.  Built in the thirteenth century, Mystras was a town that blossomed at the twilight of the Byzantine Empire, the Greekified Eastern Roman Empire that lasted a thousand years after Western Rome fell.  Down the years it became a regional capital and a hangout place for Neo-Platonist philosophers.  As the empire slowly declined, the literary treasures of Classical Greece trickled in, eventually arriving in Italy, and sparking the Western Renaissance.  In the scheme of things, Mystra’s a remarkable town, in a gorgeous valley, and a Byzantinist like me is one happy camper.

Aleppo pines and grass have grown over the terrace slope leading up to the seasonal palace. Literally carved on top of a hill, the streets wind in ziggerzags, turning into chapel and after church after chapel. It’s incredibly well preserved -icons still adorn these grass-strewn churches- some remain in use today. It’s quite the fairy tale. Mental note: wedding photos would be fantastic here. 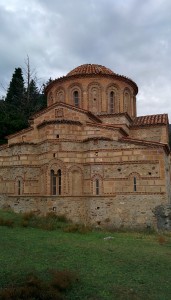 It’s a solemn place -the very last Byzantine Emperor was crowned here, before hurrying off to defend Constantinople in 1453.  As befitting of an empire in its last age of art and glory, the figures are solemn and heavy, full of dark colors and deep frowns. Take the Christos Pantokrator below.  THe photo’s not immaculate, I confess, but take the dome as a sample of Byzantine art.  This is the interior of a Byzantine church -the round dome ceiling acts as a kind of symbolism of the world -with Christ at the center, clutching a book. His tunic is red (for his blood is human and red), but his cloak is blue (for He’s God and Spirit).  All around Him in this dome are saints, flanked by other saints, and quite literally the icons tumble down on the viewer, story after story.  The idea behind this one aspect of a church -the Pantokrator -is that Christ is quite truly sustaining all things, the heart of the party and the duke of the disco. Or All Ruler, as it translates more solemnly from Greek.

Unlike the more Protestant layout familiar to our Dutch Hope-lites, the Eastern Orthodox Tradition places great pride on adorning the interior of their churches, with gold, wood, and paintings of the saints. From what I’ve heard of Orthodox Christians, the point is that God is now both flesh and spirit, both physical and metaphysical. To emphasize one over the other borders on heresy -and they had seven feisty councils to prove it.  How can liturgy and theology be refined and polished, while the house of God remains empty?  How can a church declare both the carnality and the eternity of its King?  The Byzantine answer lies in the icons here. 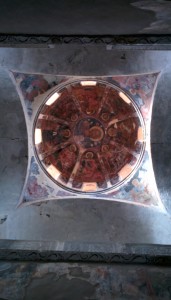 The descent is a tricky one -the moss has grown over the cobblestones, but slowly we make our way back to the bus. Pass the arches and pillars and cypresses, the red brick hums to itself as we make our way back to New Sparta.  In antiquity, the roar of Lacedaemonians, the chants of monks; in the present, the whisper of motorbikes, the sweet press of oranges. 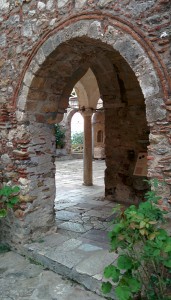 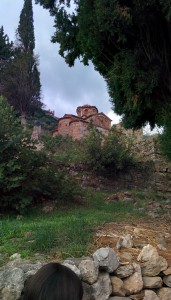 * Menelaus was the husband of Helen in the Trojan War, and King of Sparta. He’s a very decent wimp, and if it weren’t for his warhawk brother Agamemnon, the Trojan War would not have been such a thing.

**As a devout Strunkist, I would say “him and her,” referring to an obviative fourth person.  But this seems a little gender-binary, and so “them/their” is the best I can do, given the limitations of English.  Forgive my ingrammaticality.