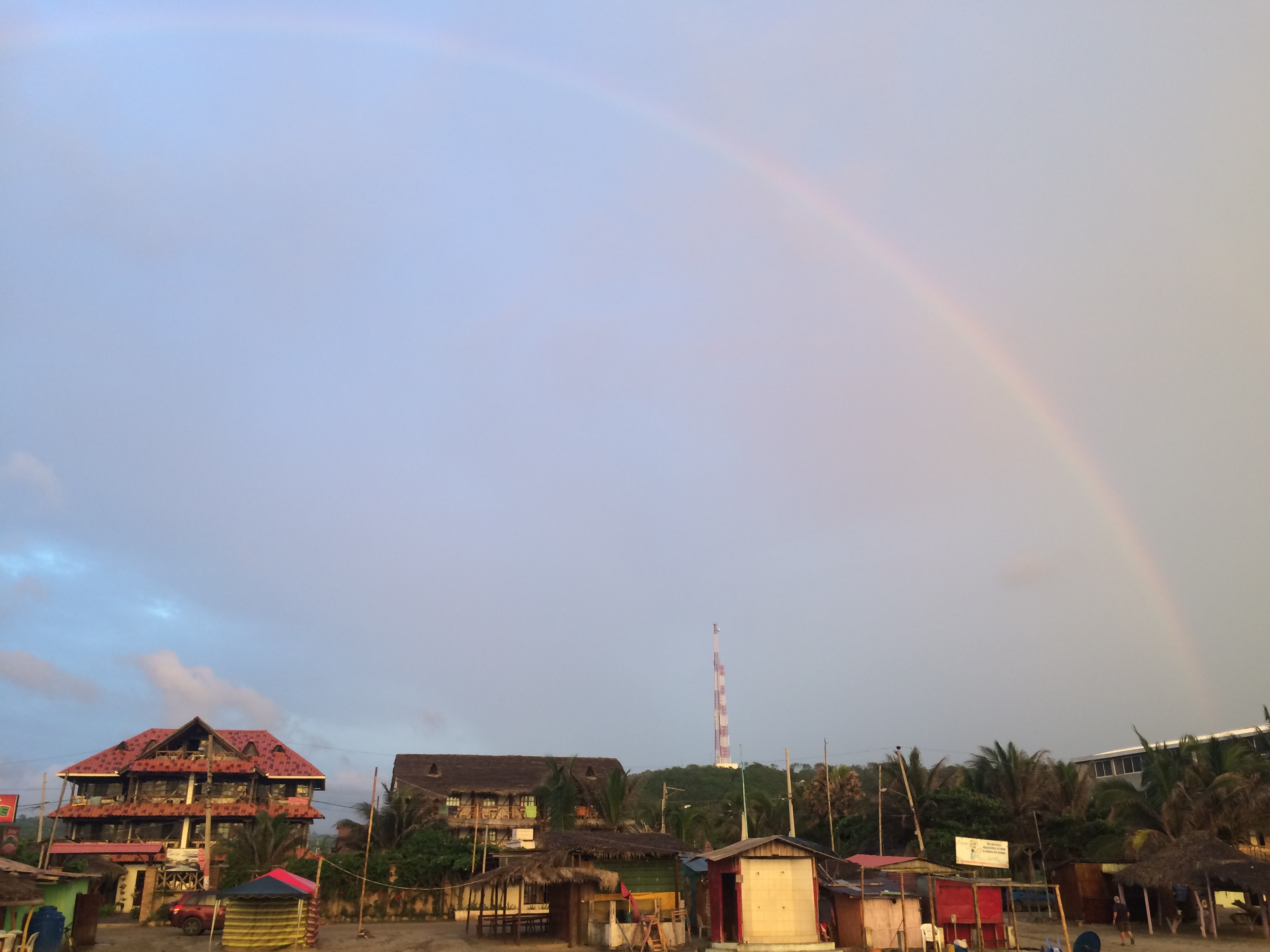 This weekend my friends and I traveled to a town on the coast called Canoa. Canoa is not the typical beach town that you think of, but rather it consists of hostels and small outdoor restaurants/bars that line the beach. It isn’t very developed, giving it a feeling of seclusion and peacefulness which makes for an ideal getaway from the city. It was a trip that we had been looking forward to for a while and a few days before we were supposed to leave we thought we weren’t going to be able to go because there had been an earthquake on the coast (we even felt aftershocks all the way in Quito which is 6 hours away). Luckily, the staff at IES did some research and discovered that everything was fine in Canoa and we were cleared to go. So we packed our swimsuits, sunscreen, and shorts and headed for the beach.

We left on Thursday night at 11:30 which put us in Canoa at 5:30 in the morning. When we arrived, we walked down muddy roads that were lined with stray dogs and I thought, maybe this place isn’t as nice as everyone had told us it would be. But I was definitely proved wrong once the sun came up. We found our hostel and walked across the street to the beach as the sun rose. A few friends and I decided that a swim was the perfect way to start our vacation, and indeed it was. We jumped over the waves and tried to comprehend the fact that we were at the beach when the day before we were just sitting in class.

For most of the weekend, I relaxed in hammocks, took on the huge waves in the ocean, ate a lot of good/cheap food, watched colorful sunsets, and grew even closer to these friends who have become so dear to me. We shared stories and laughed a lot, which really solidified how unique our group is. We come from all over the United States, having different personalities and backgrounds, but somehow we all get along so well and have become a group that is close because of the vulnerability that studying abroad brings. Basically, we are one heck of a group and getting to bond at the beach was one of the best parts of the semester thus far. 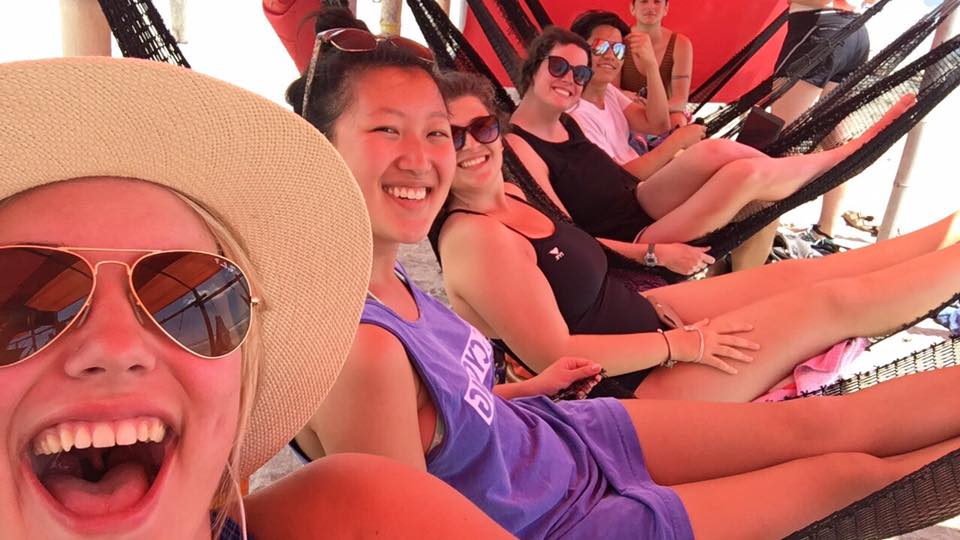 Most of us decided that we wanted to enjoy the beach for as long as possible, despite the fact that some people were insanely sunburned (mainly me…thank you Ecuadorian sun) so we took a bus back to the city at 10:00 p.m. on Sunday. I got home at 5:00 a.m. on Monday, giving me a bit of time to sleep before going to my 11:00 class. Even though I was exhausted and am still trying to get back on a normal sleep schedule, it was worth staying in Canoa for an extra day.

This weekend didn’t consist of hiking or crazy adventures, but it was a weekend with much needed rest, the most beautiful sunsets, and great conversations. After this trip, I am thankful for friends who share a passion for traveling and for this country that offers so much biodiversity everywhere you go. 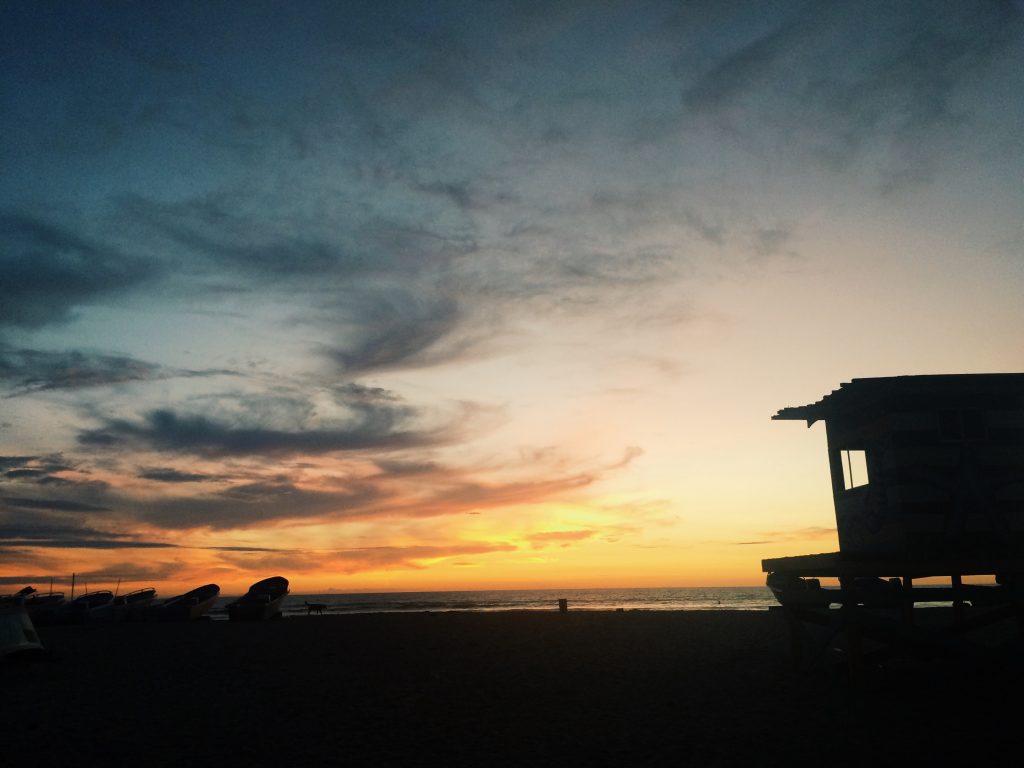