My alarm springs to life at 6:30 AM in our windowless cabin.  Our modest cruise ship of sleep-ridden Americans has swept into the ancient harbor of Heraklion, Crete. Κρητη, as it’s known in Greek (Kree-tee).  We have good butter and bad coffee at the little breakfast bar, and tumble into the waiting buses for the semester’s very first field trip.

The CYA has organized several five-day long field trips scouting the historical bits of Greece. Crete was first on the list. Of course, virtually every roadside village in Greece has an archaeological museum, a hidden Byzantine church, and a gift shop full of Parthenons, so finding ancient things is not hard. More difficult is the task of hoisting a hundred boorish Yanks of dubious sobriety up the slopes of Mount Ida –a task the CYA has performed admirably.  They’ve done this for forty years, after all.

But a little background on Crete.  If you google a map of Greece, you might see a long, flat french fry sticking out in the south Mediterranean.  It’s a big island, as Greek isles go, and remains remarkably fertile and resource rich.  Which is perhaps why the first European civilization sprang up on these shores: the Minoans.  Isolated by lots of sea, it was still in sailing distance of mainland Greece, Egypt, and Canaan -ideal for trade. Which may also explain why the Minoans were evicted by the Mycenaean Greeks, who were succeeded by the Classical Greeks, then Pirates, then Romans, then Byzantine Romans, then Arabs, then more Byzantines, then Venetians, then Ottomans, then British, then Nazis, and then, of course, Syriza. This is an island where excavations have excavations under those excavations, w 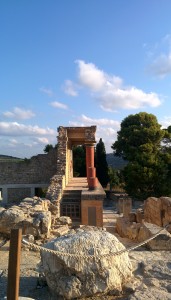 here towns have towns under them, and yes, labyrinths are found under labyrinths.

You might dimly recall the Greek myth of the Minotaur.  Born of a bull and a queen with rather feral tastes, the cow-headed, man-bodied Minotaur was locked away in a labyrinth under the Cretan king’s palace. The legend speaks of its notoriously treacherous corridors, incomprehensible to the symmetric Greek eye. Myth though it be, it’s not hard to see its resemblance in the mazelike complex of Knossos. 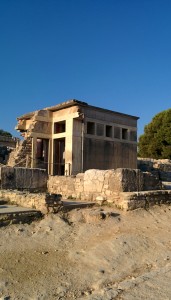 Rebuilt several times of the third and second centuries BCE, the palace of Knossos stands remarkably intact for a complex almost three thousand years old. Reconstructed in part by Sir Arthur Evans, we’re not quite sure if this was a palace… or a city court, or a temple, or a storage complex, or a bit of everything.  All the same, this was one of the great reasons I came in the spring, and I’ll let the pictures of ancient things speak for themselves.

It’s so surreal standing in places you’ve spent your life reading about.  To have your shoes communicating with stones that have known feet before the first letters of the Bible were scratched on parchment. Lord a’mercy. 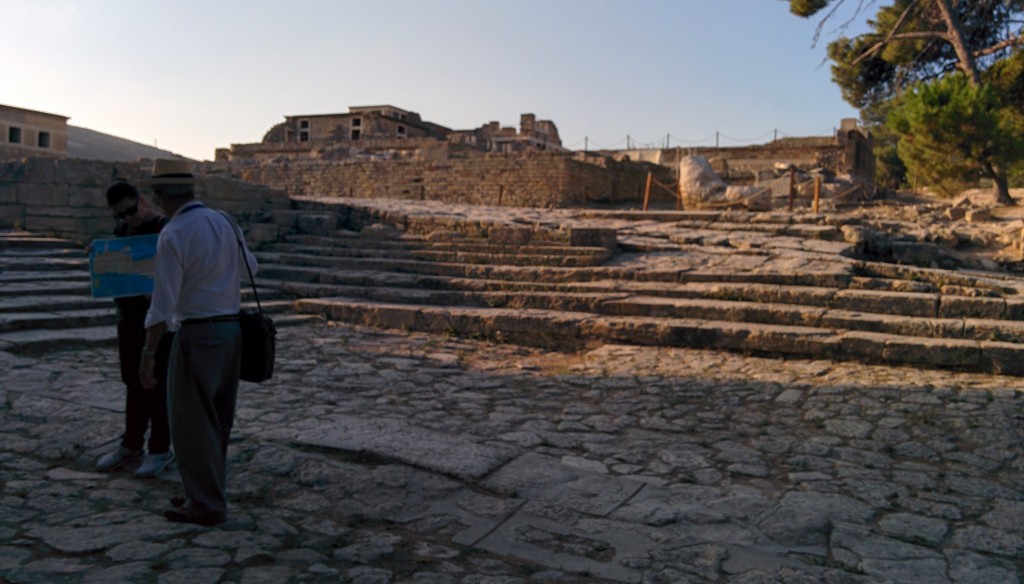 Other highlights: the positively majestic mountains, cinnamon juice (canelada, in the Greek), wine tasting in central Crete, and a Venetian fort on an island with…cacti.

We took a hike down the splendiferous Imbros Gorge, a five-mile hike down massive rock formations, donkeys, and goats.  We returned to our hotel at Chania that evening, and ate a lot of gelato by the sea.  One more photo of the gorge and I’m done.  Thanks for listening! 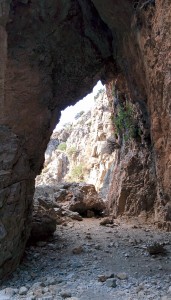