All I can say is: I’m so glad I picked Rennes.

I come from a small town and the idea of living in a city made me feel extremely wary. Most of the grand metropolises I’ve visited have seemed less grand and more smoggy, noisy, and claustrophobic. How can I enjoy all a city has to offer if I can’t breathe in it?

In Rennes, none of these things is true. The noise level may have increased a little, but it’s mostly the distant murmuring of café customers, occasional traffic noises, and the rare police siren. And a lot of high-heel-on-sidewalk clicking.

Nor is Rennes claustrophobic. When I visited New York City, I felt like I was suffocating because of how many people were crammed into one space. The buildings stretched so high, I felt like they made a ceiling that trapped us inside. Here, while I may live in a high rise nestled among a few others, the city is mostly composed of smaller buildings–four stories at the most. In fact, on Saturday I managed to get away from buildings altogether. I went for a run, deciding to just follow a canal that runs by my apartment, and within a half hour I found myself running by grassy fields and tractors! 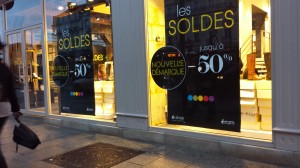 However,even though Rennes is pretty small as cities go, the energy doesn’t go anywhere! Right now, the Soldes are going on, so the streets are full of people shopping, selling roasted chestnuts, and playing all sorts of instruments.The Soldes are basically Black Friday for about a month. But there aren’t any other sales throughout the year, so most people take advantage of the opportunity. Even if you don’t buy anything, it’s fun just to walk through the streets of the centre-ville admiring the variety of all the little shops!

As for city smog, unless you walk directly behind one of the ten billion French people who smoke, it’s non-existent. It rains so much here, any toxins in the air simply disappear. I couldn’t believe how fresh the air smells!

The rain, of course, means that I can’t go anywhere without an umbrella. Don’t let a bright morning sun fool you! Last Saturday, I woke up and decided to visit the outdoor market in the gorgeous warm sunshine. Not a cloud in sight. Since the conditions were perfect and I didn’t want to be hindered by having to carry stuff, I decided to ditch the umbrella. Boy, was I sorry. At 2PM, without warning, it poured. I was soaked in seconds and had to endure the stares of hundreds of French people and their sturdy black umbrellas as I scurried back to my apartment. Never again will I reject the sage warnings of my host mother!

Luckily, all the rain makes the sunny days all the more wonderful. Every time the sun cracks through the clouds, everyone tells us to profitez bien while the sun shines. So we do!