I’ve landed in fair and summery Greece, which shall be my home for the next four months. At noon today, the plane that moseyed me up from Kuala 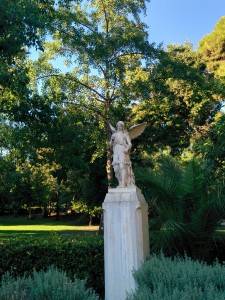 Lumpur gave up her jet-lagged dead. And here I am at last in the cradle of feta cheese, democracy, and the totalitarian state. Quite a resume for a nation so mountainous.  Not that the Greeks saw themselves as a nation, let alone a full-fledged state, when goat cheese, Athens, and Sparta were forged. But now I ramble and this is what I promised I would not do. Basically, I’m an incredibly happy classics-history major who’s missing his family lots but glad to be where he be.

I’m part of a large, all-American academic centre in Greece, creatively known as the “College Year in Athens” program. The organizers and faculty have been extremely warm, settling me into my new quarters. They also had a cab waiting to ferret me away to an unassuming apartment in central Athens. A friendly cab driver whose IPad kept toppling from its GPS stand. He lost the wheel for a full second trying to catch it. In a tunnel. On a highway. It’s remarkable how unnerving cement can look when approached from a right angle, at 50 miles an hour. Two minutes later he charges down a one way street the wrong way, forcing the approaching car to reverse into a trafficful mainway. “She is very good,” he says, conversationally. Evidently this a matter of course. I compliment a bracelet of icon cameos he keeps on his gearbox. He pulls them out: Cyril and Methodius, the Theotokos (‘God-bearer’ -Mary), and a gleaming Christos Pantokrator, a golden Jesus with a book in his hand and a halo to match his immaculate collarbones. He grins. “For good luck, these ones. Good luck for drive.” 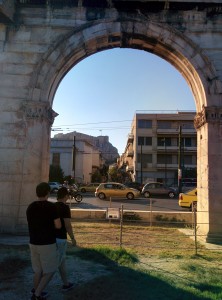 that, I and my luggage have arrived unscathed. I’ve checked-in at the CYA center; I’ve eaten Dominos pizza and good cheese; and I’ve also had a chance to pull out my toasty TARDIS robe. I’ve walked out to the outskirts of the Acropolis, which looks amazing even under renovation. Eek! But more on that when I actually ascend Athena’s hill.  In the meantime, hither by His grace I’m come. All is as it should be.