I spent this past weekend in Wellington. After finding incredibly cheap flights with Air New Zealand, Max and I decided to spend a few days in the capital of New Zealand.

Flying into the city was absolutely beautiful. Situated on a hilly peninsula at the 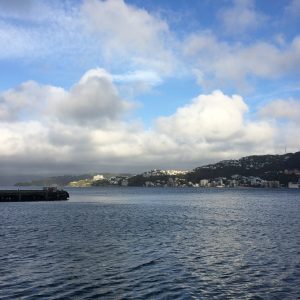 southernmost part of the North Island, the city of Wellington is New Zealand’s second largest city with a population just under 400,000. The city is seat of government for New Zealand, also earning the title of world’s southernmost capital of any sovereign state.

We arrived at night and our first goal was to find our hostel. We had decided to stay at the same type of hostel that we had stayed at in Queenstown, a Nomad’s hostel, because the service was friendly, the rooms and bathrooms were very clean, and they provided a free breakfast. As usual, our hostel had an incredible location, two minutes from the harbor and a five-minute walk from most of the city’s attractions. 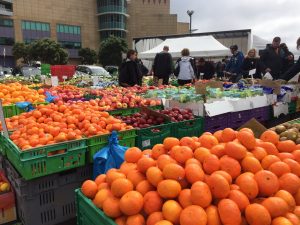 Sunday morning we got up and our first stop was the local market. There I had a brunch of fresh fruit and veggies, all for $4 – absolutely unbeatable. There were buskers playing guitars and singing who added to the atmosphere of the place.

After the market we decided to walk to Te Papa, the cultural history museum of New Zealand. This six floor museum offers a remarkable interactive history of New Zealand, from both Maori and Pakeha (white person) perspective. There is a large theatre in the museum and when we were there it was showing a film on the famous WWI loss at Gallipoli, in which New Zealand suffered great casualties fighting for mother Britain. It was that battle that spurred the separation of New Zealand, and its rise as an independent sovereign power. The museum was fascinating, admission was free, and I would highly recommend it to anyone interested in learning about New Zealand.

Following the museum we walked up Mount Victoria, to get a spectacular view of the city. It was more than worth it. You could look across the harbor and even the 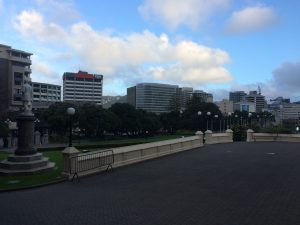 tops of the tall buildings. Coming from the Midwest it still is so strange to me to see such steep hills integrated into cities here in New Zealand. It adds an intricacy and a beauty that I did not know exist. We also walked to the entrance of Zoolandia but did not feel that we had time to get in. It comes highly recommended as a wildlife refuge top attraction; I will just have to go next time!

Sunday night we were able to check out the nightlife. After living in Christchurch, I was amazed at Wellington. The city absolutely comes alive at night. I have never seen so many people my age thronging the streets. There was music coming from every corner and people everywhere. Lights put up across the streets illuminated all activity in a soft and gentle glow. It was a fantastic finish to a short trip to the capital city.

The next morning we got up and caught a taxi to the airport to head home. Our stay was short but sweet. Wellington is a remarkable place. I definitely recommend it to anyone thinking about visiting.