As I blogged in one of my first blogs, “It’s Hard to Immerse And Why It’s Okay” I talked about my difficulty finding friends of my age that I could relate to other than my IES classmates. Though I was taking classes at a local university, I only really made acquaintances which was fine and to be expected. I was always told that making friends among local students can be sometimes difficult as friend groups are pretty much set while Chileans are known to be somewhat timid when talking with new people. Though I heard this many times, I didn’t think it would really be a problem and still to this day I still think the problem was with me. I was a little scared, to be honest. I have always put unrealistic expectations on myself to speak very good Spanish and I was nervous about being teased because of my American accent. Silly, right? But luckily, regardless of this fear I ended up meeting a great group of friends that I have stayed in touch with even after my program ended. I met two of them, Araceli and Verónica, in a volunteering meeting at the local university where I took my Religion course and they were super friendly and asked everyone around them for their names introducing themselves saying they were from Paraguay.  Right before I left this meeting, we ended up exchanging numbers to stay in touch about campus events that were coming up. At the moment, I didn’t think much of it since I had met many students from class and ended up forgetting their names or never hearing from them, but it was within weeks that I began to spend a lot of time with them, and eventually I began feeling like I was a part of something. They would often invite me and some of my friends to school functions and places around the city to explore.  I would always thank them profusely for extending their invitations because it really meant a lot to me and even more so when they began teaching me about their culture.

“Eventually I began feeling like I was a part of something”.

I learned a lot about their country’s second language, Guarani, which is just as official as Spanish and originates from its indigenous population. In Paraguay, these cultures are not separate but are one, as its blood flows mixed with the two. My friends Ara and Vero, who are Psychology majors, would often tell me that Guarani is important to connect with their patients. Sometimes when addressing a patient in Spanish, he or she can be closed and not as open to communicate; but as one speaks in Guarani, one can communicate more emotion and raw sentiment. It really allows for a deeper interaction. I also found Guarani to even be part of my communication with them as they taught me many words like purrete which means cool or maena which means triste or sad, or my favorite one, mopio, which we would always say after someone said something unbelievable or that was a lie. I still will never forget the first time I used it. One day I was invited to their apartment that they rented out along with other Paraguayan exchange students and they burst out laughing. At first I felt that my fear of being teased of language had been realized but they were actually laughing with me, so excited that I had been learning Guarani. At this moment, one of my friends, Sayra had clapped in glee saying that I had already become Paraguayan. 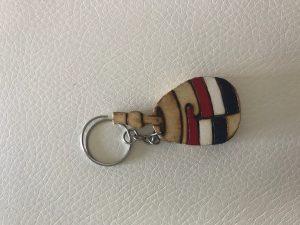 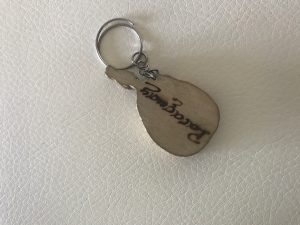 A parting gift given to me about a few weeks before I left for the United States to remind me that I will always have a home or many in Paraguay.

If I ever felt like I had found friends before, I felt like I had found something greater, like a second family. I truly felt home. It was where we would all vent to each other, share our dreams, bake our own pizzas, dance and watch movies until we were always reminded of the homework that was due the next day or the test we had to study for. Like all my family reunions that scheduled for a time, we would always gather at least an hour late and leave hours after we say it’s time to go. We loved food, we loved to dance, we loved to eat, and we loved to talk. To be honest, their apartment was something that of a symbol for me: that whenever I felt I needed a friend, it would be there on Calle Paraguay. To this day, I think it so ironic that the very street they lived on is named after their country, but it made it easy to find and I never had to look hard to find it. It was truly a home a way from home. It was my Paraguay in Chile.