Last week we spent eight days traveling all around southern Tunisia. We learned about water in the desert, rode camels, and visited Star Wars sets.

We left Monday morning and headed to Kairawan where we visited the Grand Mosque. It was a beautiful structure.

Next we headed to Sidi Bouzid. I have been waiting to visit this town during my entire stay in Tunisia. This town played an important role in the revolution. First, it is important to understand that the revolution began in the interior region in small rural towns such as Sidi Bouzid. The slogan of the revolution when it began was dignity and social justice and it was centered on economics. It was only as as the revolution spread to the coastal cities that people began to demand a new form of government. It was then that two more words were added to the slogan, liberty and democracy. If it were the interior regions and their cry for a more just economic system, the revolution might not have happened.

One of the events that caused the revolution to spread to the coastal cities and really gain traction was the self-immolation of Mohamed Bouazizi, a street vendor from Sidi Bouzid. Bouazizi self-immolated to protest the confiscation of the scales for his vegetable cart. Although he went to various ministries to protest this, his scales were not returned to him. Scales are a very expensive item and by confiscating his scales, Bouazizi was not able to work. He served as a simple for ordinary Tunisians who were struggling under the Ben Ali regime.

As we drove through the town we noticed there was a large poster of Mohamed Bouazizi hanging in the main square. Nearby there was also an art piece that was meant to represent the vegetable cart.

The main reason we were traveling through Sidi Bouzid was to meet with an NGO called I-Lead. This is an organization run by a group of activists in their twenties from Sidi Bouzid. They hold leadership workshops for youth in Sidi Bouzid. Many Tunisian youth are very discouraged with the current situation in Tunisia. The unemployment rate is very high for youth and the economy does not seem to be improving. I-Lead hopes to involve the kids they train in their community and in turn they can be examples to others. I enjoyed hearing about their work and I may be visiting I-Lead during my ISP period to learn more about what they do.

Our final stop for the night was Gafsa, which is considered the door to the desert. We arrived late in the evening and left the next morning since there is not much to see in Gafsa.

We spent the next day exploring oases in what used to be small berber towns. The first town we stopped in was called Chebika.

As we would learn during the duration of our trip, many of the small towns in the desert underwent relocation projects under the first president of Tunisia, Bourguiba. Bourguiba was very much focused on development and forced entire villages to relocate so they would be less isolated from the rest of Tunisia. In the case of Chebika, the new village that was build was only a mile away.

During our journey through the desert we stopped at many look-out to admire the view. Here are a few snapshots, although the pictures really don’t do it justice. 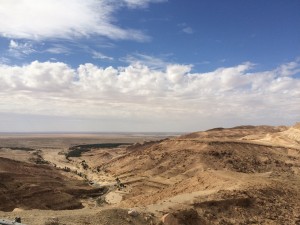 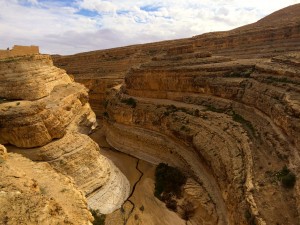 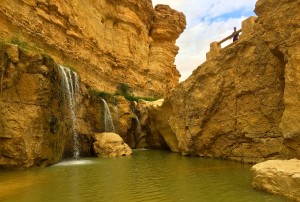 Mos Espa was the town where Anakin was raised for the first year of his life. It  is one of the only structures that was built for the film since many of the other structures used already existed. The town was much smaller than I anticipated. It was also strange to visit a movie set in the middle of the desert. Up close it was not in the best condition and was much less glamorous than I imagined, but it was still fun to visit.

Exploring Star Wars was fun, but the best part of the day was climbing the dunes to watch the sun set. 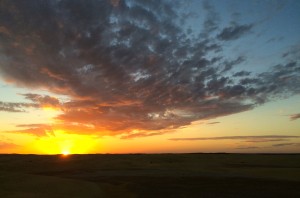 We spent the next on a drop off-exercise in Tozeur. Mounir, our academic director gave us an assignment. We were to learn about bricks and water in Tozeur. We had Houda, a Tunisian journalist who gave a lecture during one of our classes and who had decided to visit use in Tozeur, to help us with our assignment.

We started the day by renting a carriage to travel around the city. I felt like such a tourist, but it was fun regardless.

We drove all around the city visiting various oases and learning about how water is distributed to each oases and family homes. Water is scare in Tozeur and rain is not a common occurrence. Sometimes it can go an entire year without rain. Because of this an irrigation system was created. Although the system  existed for many years, in the early 1900s electricity was added to make the system more efficient and less laborious, even though it increased the price of water.

Since not many things grow in the desert, oases are an important resource for any family living in the desert. We noticed that every inch of soil was used in the oases. Most oases we saw had date palms, but they also had many other things such as banana trees, lemon trees, and several herbs.

Often families will own a small plot in an oases. These plots are inherited and passed from father to son. Each plot is watered for four hours each week. The man who explained all of this also happened to be one of the carriage driver’s. He explained that although date palms covered the oases, they can often be work to care for. It can take five years for a date palm to produce fruit and it takes thirty years for a large quantity of dates of a high quality to be produced. Men who harvest the dates have to climb the tree to pick the dates. I can’t imagine having to climb a date palm!

After we learned all about water, we moved onto learning about bricks. Our driver took us to the outskirts of town where all of the brick-makers in Tozeur live. Each building built in Tozeur is required to be built using 30% brick. The government of Tozeur imposes this law to keep the culture of Tozeur alive. It also helps provide jobs. There are 300 brick-makers in Tozeur and it is a trade usually passed from father to son.

This man was so gracious and took an entire hour out of his day to teach us all about bricks without asking for anything in return. Brick making is a very communal affair. Someone must be in charge of collecting the mud that is used to make the bricks while another person must collect palm branches that are turned into ash and mixed with the clay.

After we were shown the entire process of brick-making, we were shown how to make pottery. This man seriously knew how to do everything. He was so good at making pottery, I have never seen anyone spin a wheel so fast.

After we had learned as much as we could we went back to the hotel and later that night we presented what we had found to our academic director. It was such a fun way to learn about important issues in southern Tunisia.