Chocolate, sauerkraut, schnitzel, pretzels, potatoes and beer all come to mind when people think about German food- and they’re definitely not wrong!

Unlike America, German stores are much more specialized than American ones. There’s no Meijer equivalent where you can get everything (medicine, cleaning supplies, furniture, pets, food, sports equipment- EVERYTHING) you need in one go. Rather, you need to visit specific stores for all of those things. Every block has one or two bakeries, where you can pick up bread, pretzels, confections, and pre-made cold sandwiches.

These small bakeries are great places for a quick cup of coffee with a croissant or a small lunch. And German bread is amazing. In an interesting quirk of the German language, sliced sandwich bread isn’t called “brot” (bread) here- the German word is “toast”, whether it’s toasted or not! I’ve also seen “toast” with American flags on the packaging, because it’s considered an American food!

There’s certain foods in German that are so distinctly American, the packaging reflects it. Even though I’ve never even seen this brand of peanut butter back home, its label sports symbols of America- a 10-gallon hat and sheriff star, the Statue of Liberty, the ole stars and stripes… and the designation “XXL”, even though this jar isn’t significantly bigger than a standard jar of peanut butter in America. “Supersized” food means “America” to Germans.

German grocery stores (Lebensmittelgeschaeften, literally “sustenance shops”) are a different experience, too. They’re much more cramped than American stores, and the selection is a lot smaller. The presentation is also usually a little less neat, too. Beverage bottles are stacked on top of each other in the packaging that they were shipped in, so you have to wrestle them out, and produce tends to be a little more banged up. 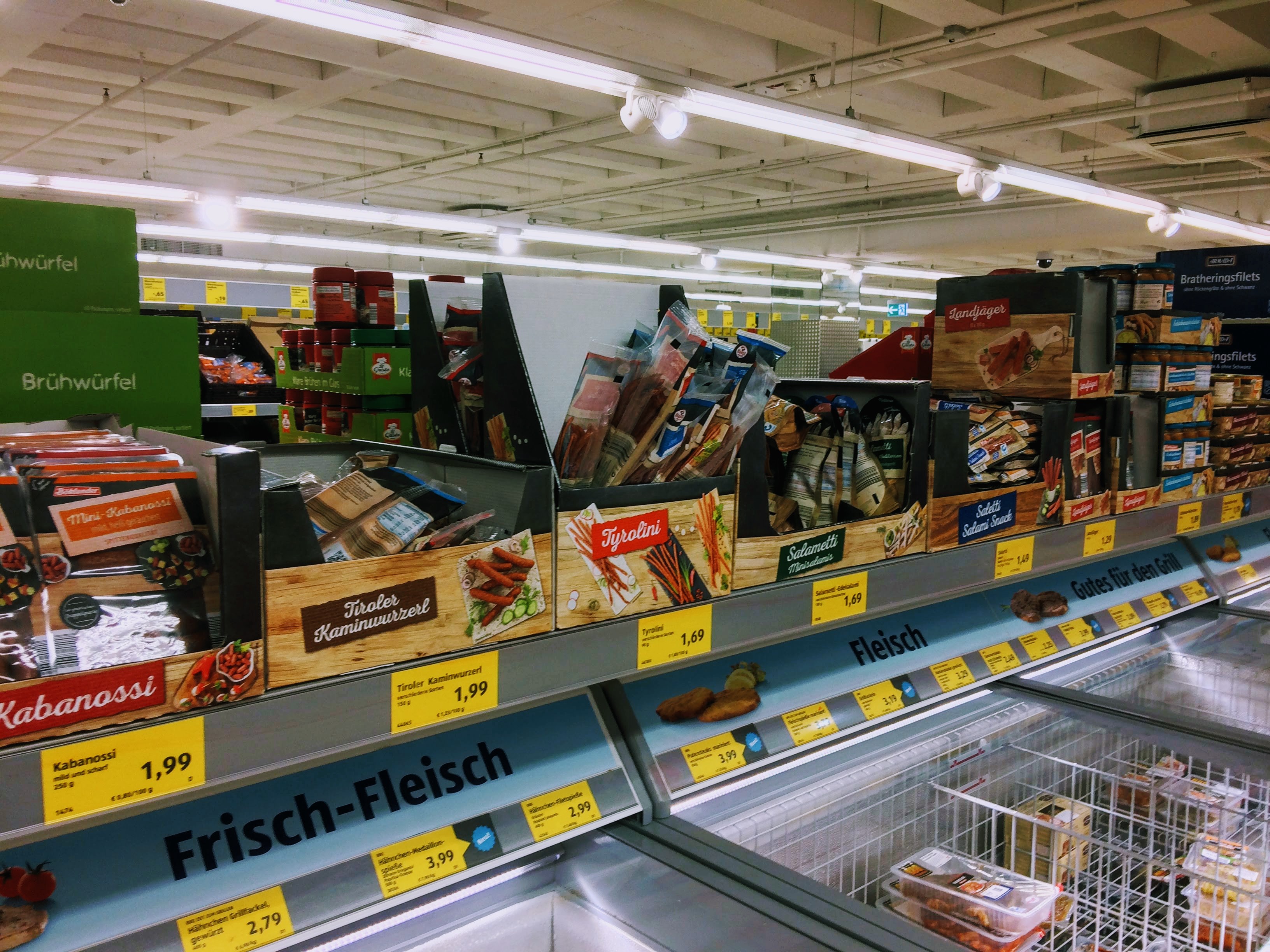 Instead of chewing gum and chocolate bars in the checkout line, there’s miniature bottles of hard liquor and cigarettes for sale- you’ll also find the discarded remains of these vices littering the streets of Germany.

Germans seem to buy food in smaller quantities than Americans. You can only get milk in 1 liter cartons (for as much or more than a gallon of milk in America), and there’s no 2-Liters of soda pop. The milk and eggs are also stored without refrigeration, simply on shelves in the store. When I bring my milk home, I just put it in the pantry until I open it. In the photo above, if you look closely you can read the date on the milk carton to the left (remember, Germans write the date Day-Month-Year). This carton was purchased in mid-March, but is dated out to the 22nd of June! People keep milk long-term in pantries and cellars here. It’s also much more common for people to buy whole milk for drinking or using in coffee. The lowest fat percentage available is 1.5%- any American who prefers the taste of skim milk will just have to settle for water!

After experiencing grocery shopping in Germany, I think that perhaps when the Germans imported assembly line/conveyor belt technology from Henry Ford, they didn’t understand that it was for factories. Famous German efficiency extends to the checkout. As per E.U. law, bags aren’t free in Germany, so most people bring their own reusable bags, and cashiers don’t bag for you. Instead, the cashier scans your stuff as fast as possible while you wildly shove groceries into your one or two bags, trying not to crush the more delicate items in your haste. As soon as the cashier is done scanning, you’re expected to pay- which means that there’s always some items left over that you haven’t been able to stuff into your bag yet when the cashier begins scanning for the next transaction. No worries, though, because the Germans have thought of this! At every grocery store there’s a bank of counters along the wall beyond the registers for the sole purpose of scooping up all of your remaining groceries in your arms, waddling over, and bagging the rest. It’s quite invigorating.

At home, the staples of the German diet seem to be cucumbers, butter, jam, salami, cheese, and bread. That’s the most typical thing my host family and I eat for breakfast, lunch, and dinner. Germans also enjoy eating what, to me, appears to be raw bacon. The excuse that they give for this sin against bacon is that it’s actually prosciutto ham… though I’m beginning to wonder if “prosciutto” isn’t just the Italian name for “raw bacon”.

Another favorite breakfast food is Müsli. The closest American equivalent would be granola, but that’s not a perfect pair. The main ingredient of Müsli is raw, rolled oats- what we would associate with oatmeal. Here, however, you just add cold milk and chew a lot. Other ingredients can include chocolate shavings, dried fruits (especially raisins), and corn flakes.

Another, less traditional German staple is the Döner. The national infatuation is such that there’s even songs about this Turkish sandwich, and there’s a phrase that says, Döner macht schöner (Döners make you prettier).

The final product is quite similar to the Greek gyro sandwich, which makes sense given the proximity between Turkey and Greece. Germany has a relatively high population of people of Turkish decent, because there was a worker deficit after the end of the Second World War. Many Turkish men moved to Germany to work, then settled down permanently. Luckily, they brought their cuisine with them!