This past weekend I went on another IES excursion – a must do for anyone visiting New Zealand and wishing to learn about the culture and people. With other IES students we stayed out at a marae. A marae refers to “meeting grounds” and is central to all Maori communities in New Zealand. The marae usually is composed of a complex of carved buildings and grounds and belong to an entire iwi, or tribe, for community uses.

Friday evening we caught a shuttle out to Ngati Moki marae, at the base of lake Ellesmere. We were greeted with a Pōwhiri, a traditional welcome, which included the removal of shoes and exchange of verbal introductions in affirmations – in Maori of course. 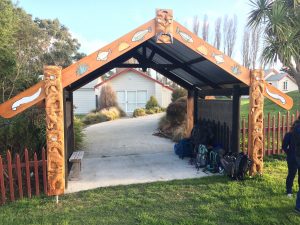 After the welcoming we went down to a lower building beside the main hall to prepare our beds in a communal bedroom. Because there were not very many of us, we were able to double up some of the mats to make the bedding more comfortable. Following getting the bedding situated we went back to the hall for a dinner. Dinner was a fabulous array of New Zealand beef and kumara with several side salads. It was served buffet style and then we all helped with dishes.

We then went into the community meeting room, removed our shoes (everyone must as a sign of respect), and learned Maori string games, similar to cats cradle, while listening to a lecture on tribal (iwi) history. We were taught how to swing poi, soft white balls on a string used in traditional dancing, and learned a community song often taught to Maori children. By the time instruction wrapped up it was 10:30pm and we headed to bed.

The next morning we got up for a breakfast of muesli, yogurt, and crème. Following that we went outside and learned how to cut grass for weaving. We then walked out to the beach and split up into two teams. Each team had three hours to construct a whari, a traditional hut. Our hosts would judge us. 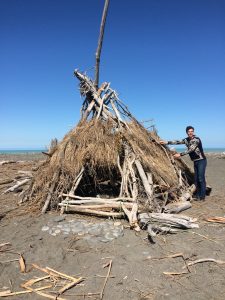 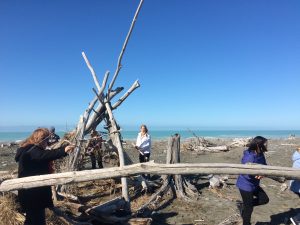 After the three hours we got pictures by our huts and walked back to the marae. A late lunch tasted fabulous after an entire morning in the wind down at the beach. We were taught ti rakau, a game involving throwing sticks in rhythm with song. We then ended with the song that we had learned the night before and said goodbye to the wonderful hosts who had spent the weekend with us. 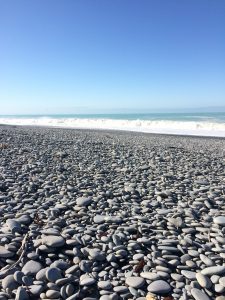 It was a fun time and gave a lot of insight life on the marae and Maori life in general. I would definitely recommend this to anyone who wants to understand life in New Zealand, particularly Maori and their rich tradition and history.