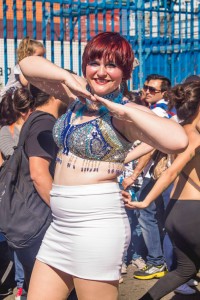 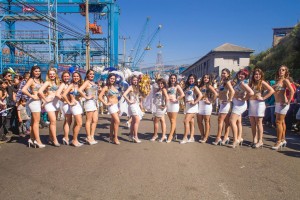 A week ago, I was a part of something awesome! There was a festival called Mil Tambores, or a Thousand Drums. It was a weekend long event, and it was so much fun! It’s been going on for fifteen years, and it’s just a celebration of happiness here in Valparaiso, Chile! Friday there were poetry and song-writing contests, drawing in many wannabe artists dying to get a chance to publicize their works. Saturday there were many small parades up in the hills of Valparaiso. There was dancing and music and fun had by many families. There were so many people in the city that weekend! It was incredible!

Sunday there was a giant parade filled with music and dancing of various groups. There was samba and salsa and dances from the north of Chile and the south of Chile all being performed. There was also body painting going on at the beach, where people could wear as little clothing as they wanted and get their bodies covered in artwork. Some pictures are amazing!!!

Sunday is where my fun came in, too. Since I’ve been here, I’ve participated in a samba group. Every Saturday I’ve gone to a two-hour practice, just learning the samba step itself and learning to move more sensually. This group performed in that big parade, and I got to be part of it! We wore heels and a miniskirts and had to sew sequins and beads on to a bra to wear. I would have never worn such little clothing back at home, no matter what the reason. But I figured I wouldn’t get this opportunity again, so I went for it. And it was a blast! Afterward my feet hurt and I was sunburned, but I’m so glad I danced in the parade. It was an amazing opportunity to participate in Chilean culture and break out of my comfort zone!