On Good Friday several weeks ago, there was a beautiful procession around the block of the church. Every parishioner was holding a candle and walking in a mob behind the priests who were singing hymns. On any given Sunday, I am often the tallest in my pew. Aside from blocking everyone’s view, this height difference was made even more problematic during the candle light procession: my hair was at candle level, ready to combust at any moment. I awkwardly wrapped my scarf around my hair in the name of self-preservation. As I did this, I heard a snicker behind me. I turned around to see a young guy who was clearly amused by my paranoia. After explaining that I wanted to keep my hair in tact, we proceeded around the church together and continued to talk.

His name is Σπύρος (Spyros) and we became “fast friends.” I say “fast friends” in quotes because it is one of the idioms I had to write down in his notebook. You can see him and his trusty notebook in the (candid) photo below: 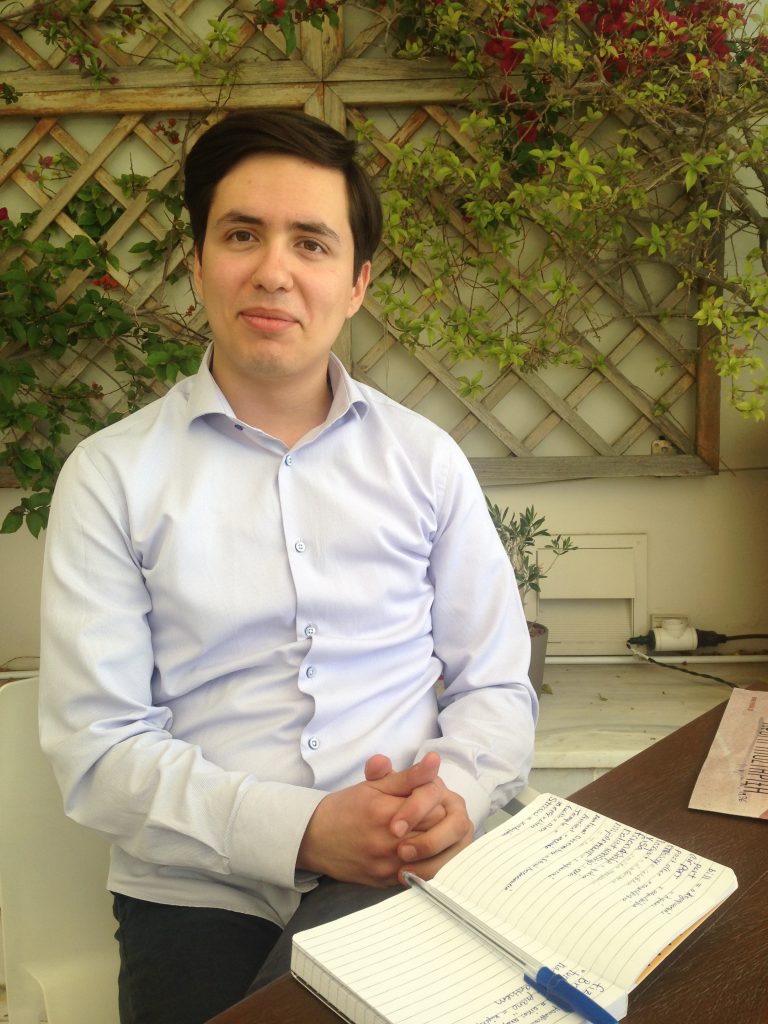 He began to carry this notebook after growing tired of asking me, “What did you say?” when I said something like “It doesn’t matter,” or “How’s it going?” Now, if I say something idiomatic or complicated, I must write it down. Yesterday we were walking and I asked if he wanted to walk left through the garden, or right through the central square. He furiously scrambled for his notebook and leafed through the pages, “It doesn’t matter!” he said. One evening, my rooommate Kalya and I cooked dinner and Spyros joined us. He sat down at the table and opened his notebook asking, “Am I the…third wheel?” at which point we could not stop laughing.

In the same way, I have begun to carry around my own notebook so I can write down new phrases like, “να σου πω την αλήθεια…” (To tell you the truth…) and idioms like, “να ‘σαι καλά” (for your health). My Greek language class is very very good, but there are some common words and phrases that are too informal for me to learn there. You would not believe Spyros’ patience as I butcher Greek, saying phrases like “Perhaps we shop for the bill,” instead of “Maybe we should pay.” and “I have fullness,” instead of “I’m tired.”
Every time I fail he says the sentence in proper Greek and I repeat it. Of course, there are some times when my Greek is so far from anything correctable that I receive a head shake and a sad “Δεν καταλαβαίνω.” (I don’t understand).

It’s been very fun to practice Greek and walk around Athens with a person who has lived there his whole life. However, meeting new friends is just another reason to be sad to leave in only twenty days. On a lighter note, I think I will ace my final Greek exam on account of all the extra practice I’ve had.