Well then! Here’s my food for the post, known colloquially in Quechua as lawa wallpa chaki, and in English as the exquisite Chicken foot soup. 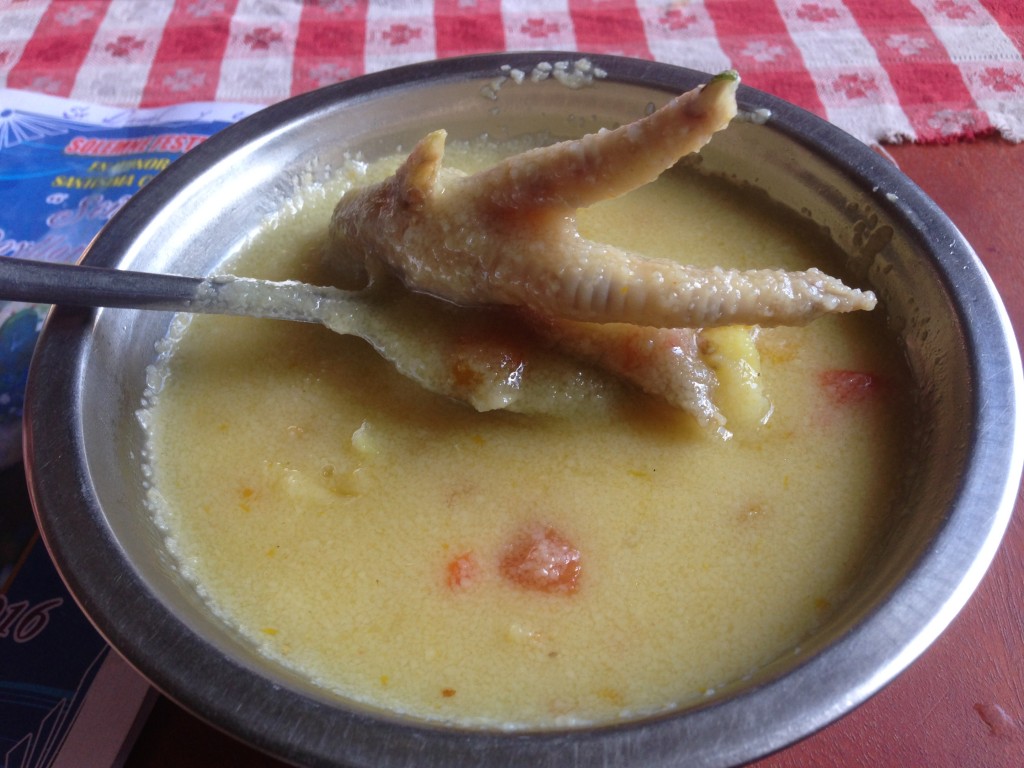 Okay, so I told a white lie. Rather than soup, it was perhaps more akin to couscous, which my host family served to me cooked with the foot of a chicken to give it some flavor. While my host sister nibbled into it with enthusiasm, I was admittedly a little taken aback by the appendage’s presence, especially this being my first formal meal with the family, and decided instead to pick around it at the rest of the bowl’s contents. Still. Good story!

My experience away from the classroom doing my sociolinguistics ISP (independent study) has been pretty fun this far! I’ve eaten plenty of good food—I had a fried egg sandwich for breakfast yesterday morning, and I’m expecting to help out soon with some beans that I bought for the family in the market. I also made a purchase of lentils, which were cooked into a stew with Alpaca meat—a combination of Indian and Andean cuisine that most people don’t think about on a day-to-day basis 🙂

Now before I get too ahead of myself, the title does beg another question: who is French?

Well, glad you asked! 😉 During the first three days of my ISP—note that this had never happened with such frequency before—three distinct individuals, in three distinct contexts, from three different places, asked me if I was, of all nationalities, French. While it’s certainly true that I speak French and feel solidarity with French culture, I wasn’t speaking it at all during either occasion, nor do I have an ounce of French blood in my body. Now hold onto your seat; this is going to get crazy.

The first took place in a shop on Saturday the 30th while I was buying a bottle of water and having an extended conversation with the shopkeepers. A foreign couple walked up to me, and upon finishing my conversation in Spanish, asked me in English, “Are you French?” Not having a clue why they would think that or why they asked, let alone asked in English, I listened for their accent—some language that included plenty of trills. Not French. More likely something Slavic or an Eastern Romance language. There’s the linguist in me.

While I thought this was nice, I didn’t think much of it. On Sunday the 1st of May I went to Catholic Mass with my Q’ero family, and was asked by a priest, “¿Eres francés?” He spoke fluent Spanish but was not Peruvian himself, or French for that matter. He was Italian. By this point I was wondering. I examined my outfits—chompa y casaca cusqueña. Not French.

The next day, Monday, without thinking I put on my Tignes – Alpes Françaises t-shirt and began to walk around the city. This shirt, gifted to me by an French exchange student who visited me in high school, and written at least partly in French, would surely raise some suspicion! And yet, a foreign man passed by me while I was headed to lunch that day and, misreading what the shirt said, exclaimed, “Go Tigers!”

He then proceeded to ask me if I was from Detroit—which in all irony is not just the correct country and state, but yes, I am from its suburbs!—and I responded to him, “actually, this is Tignes [insert French accent], in the French Alps.” After telling him how odd and amazing it was that he guessed where I came from, and not that I was French, he informed me that he was from Grand Rapids, literally half an hour away from where whoever is reading this blog in all likelihood is sitting, or was sitting a week ago. Fun story! But that’s not all.

I then proceeded to put on a jacket, for it was getting cold, and had a quick lunch. On the bus back home, little did I expect, a Peruvian man approached me after I had said “desculpe”—”excuse me”—and hardly anything more, with a question at which I could hardly refrain from cackling: “¿eres francés?”

I had just covered the Tignes shirt an hour earlier with my cusqueño sweater.

Apparently, with all the effort that I have put forward as of late to hide my American accent, the tone I use, according to this man, is more akin to what they would expect of someone from France. What I mean is that I raise the pitch at the end of sentences, probably out of an effort to be polite more than anything, and this is interpreted as a French accent.
Or maybe it’s the moustache and hat.

Well, what can you say? I’m astounded, and this has been one of the best experiences of my entire time abroad.