I’ve never been prouder than when I saw Chile make it all the way to the finals of the Russian Confederation’s Cup. It was a Sunday morning full of excitement as all of the streets were full of vendors selling merchandise for the game. The game was scheduled at noon so I thought that I would make it to church right before the game so made sure I caught the earliest bus headed towards Quinta Normal about 10 minutes away from my church. To be honest, I did not expect anyone to be at the service but it was the most full that I had ever seen it and everyone were dressed in red and white with team-wear. I was not able to stay for the sermon but only the worship and prayer which prayed over not only the game but also the primary elections which were taking place that very day.

So, after the prayer I quickly left so that I could beat the traffic before 30 minutes before noon to make it back to my host family’s home and help prepare lunch before the game. On my return with a newly bought jersey and team scarf from the streets, I found the house unrecognizably reorganized as my host dad was cleaning frantically around the house. The TV was blaring with the pre-game interviews and analysis while I heard chanting and screaming outside. Everyone was ready and excited for the match. And within 30 minutes, it all began. All was clean and all food was set. Not a movement was made. Everyone was glued in front of the TV. Every minute was more painful than the next, giving all who watch much anxiety with every silly mistake that the Chilean team made against their young Germany opposers. Unfortunately, it all ended in a loss. It was not a shoot out like Chile’s prior match but it ended with dirty and rough play by Germany. I was crushed. I honestly wanted to cry. Never have I ever been so emotionally invested in a game. I truly felt like I was a part of it, that I would be able to witness a country that I had grown to love so much make and write its own history. 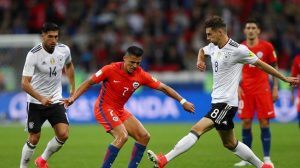