Earlier this week my group and I had the wonderful opportunity to travel to the United Arab Emirates. We were there to witness and participate in the Papal mass in Abu Dhabi! It was the most surreal experience I think I have ever had. Getting there and returning back was really difficult, but I would go through it all again just to experience something so extraordinary one more time.

The mass was on the 5th so we left a day early to make sure we would have ample time to get to Abu Dhabi, and the stadium the mass was held in. We left before the sun rose and arrived in the late afternoon. We took advantage of our time in another predominantly Muslim country to explore the different buildings of worship.

First, we visited the church because we were out around the time the Muslim evening prayers were happening. The church we visited was called St. Andrews Anglican Church. We went on a tour and learned about the church and its history. The actual building hosts over 45 different Christian congregations. I thought the church was especially interesting because it had been in the country for 50 years. The Emirati government allowed the church to be established in the 60s by the Anglican missionaries who helped build up the country’s medical infrastructure. I think the culture of religious tolerance, that began so long ago with this partnership, lead to the events of the pope presiding a mass in the UAE.

After the visit to the church and the evening prayers, we made our way to the Grand Mosque. It was really interesting to see the Emirati Grand Mosque after already having seen the Omani Grand Mosque. It was difficult to be subjective when going through the house of worship, but I enjoyed it. The compound the mosque is on is ginormous and it is as detailed as the actual building. One thing I really enjoyed is the serenity the fountains and lights gave the mosque. The courtyard is decorated with meters of crystal-clear water illuminated by soft blue lights and the light flowing from inside the mosque itself. It was so extremely surreal to be in a Muslim majority country, in a Muslim house of worship, knowing the next day I would be attending a historic event for Muslims and Christians alike.  All in all, the mosque was a wonderful experience and it was interesting to compare the different stylistic choices in both of the grand mosques I had seen.

The morning of mass had finally arrived. The only problem was that we had to queue for the bus at 3:00 am. We woke up around 2:15 to be out of the hotel in time to get to the bus stop. We had about a 15-minute walk to the bus stop. The only way we could get to mass was by regulated buses provided by the Emirati government because no cars were allowed anywhere near the stadium. That being said, they were Abu Dhabi public buses that had routes to complete so they ran from 2:30- 5:00 am. We waited in line for about 90 minutes before we got onto a bus. We arrived at the stadium around 6:15 am; the mass began at 10:30 am. Although we woke up early, we had a chance to get a quick nap in before the service actually started.

Around 8 am, the stadium began to fill up and spirits were rising.  People began chanting and doing the wave! It was incredible to see so many Christians, from all over the world and from different denominations, celebrating and worshiping together! I loved seeing how many Emiratis and Muslims were attending, as well. It was truly an image of tolerance and acceptance. The anticipation was so intense that when the pope arrived in his vehicle, the crowd erupted! The cacophony of the attendees lasted for minutes! When everything finally calmed down, the service began.

The Pope’s homily was completely in Latin so I didn’t understand much. However, there were screens with English translations on them. I gathered that he was preaching of tolerance and acceptance. The homily that was so fitting for the situation we were in: a Muslim majority country working on its religious tolerance. After the Pope’s sermon, he was escorted off the stage and mass proceeded like any other mass. At the end of the full service, the choir sang a sort of outro as everyone filed out of the stadium into chaos.

I will forever remember being a part of something so monumental and inspirational. I am so grateful for all of our coordinators that helped get us to where we were. I will hold an extremely touching and beautiful service in my heart. I will never forget the struggle of getting to and from the auditorium, and staying awake after getting two hours of sleep! Overall, the experience was one for the books and will continue to impact my life. 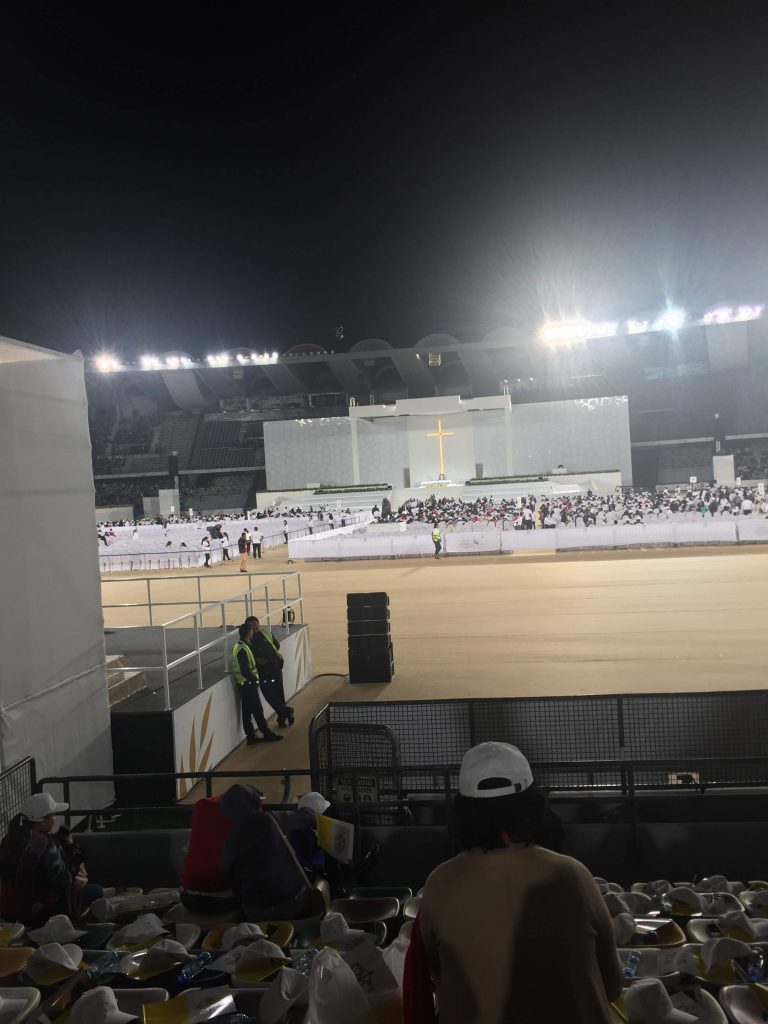 The arena was very dark and fairly empty when we got there. 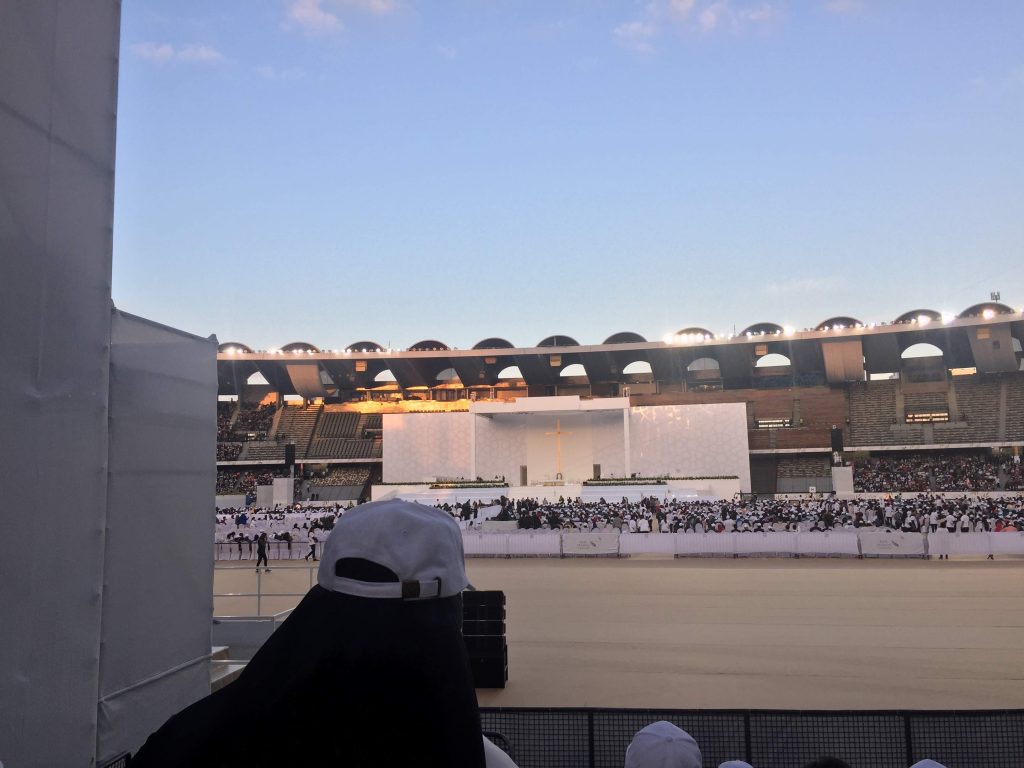 The sun had begun to rise and the stage looked heavenly! 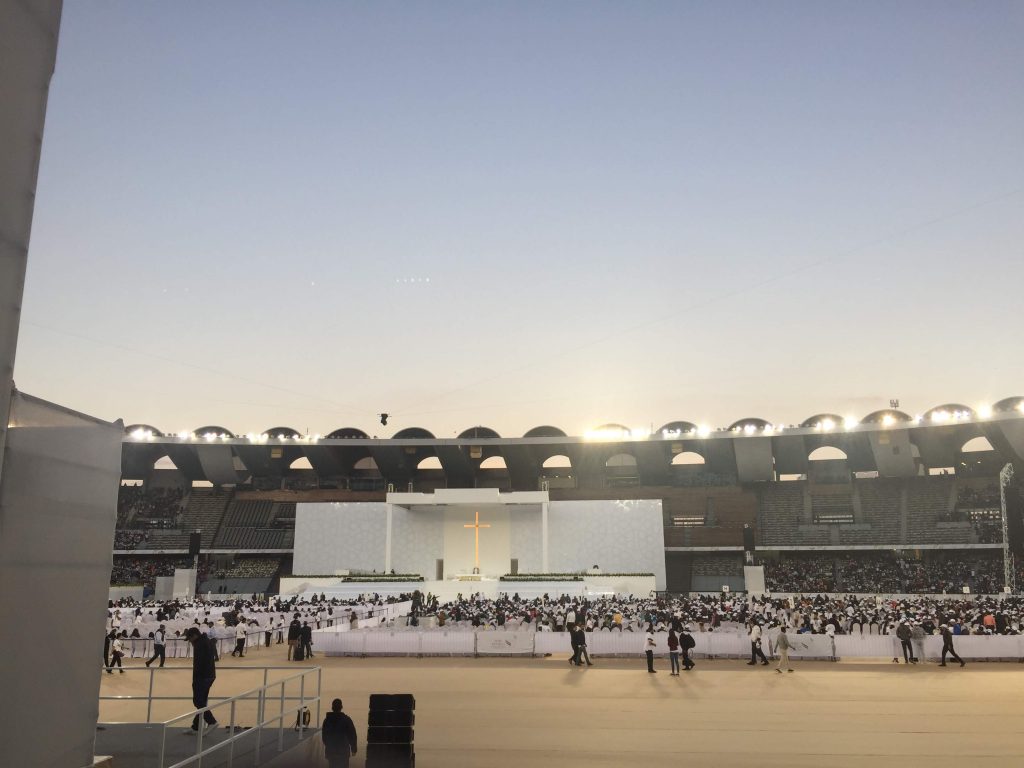