Getting to know a foreign place involves taking winding side streets and in the process discovering the most amazing coffee shop imaginable. It means getting absolutely lost, asking someone for directions, and wind up becoming rather good friends. Tasting every food in front of you, making a fool of yourself trying to explain that sometimes you think naps are the best idea a human had, and being awestruck by an old building you overlooked on your daily walk until now. These are all very present-based means of becoming acquainted with a foreign place, all of which I have enjoyed at some point in time. However, I have been fortunate to get to know Spain from another perspective in several of my courses: its rich past. So, let me tell you a little bit about Andalusia’s history, namely in times before Catholic churches were on every corner, and Arabic was more commonly spoken than Spanish.
In the 700s, the Moors invaded and took over the Iberian Peninsula, giving it the Arabic version, Al-Andalus, of what we now call Andalusia. The Moors since left a substantial mark on Spain, most notably through their architecture that still stands today. In fact, the great muralla (wall) constructed to protect the city of Granada is still visible, tucked within various neighborhoods. Key ports that allowed access and communication between the protected city and the farmlands outside the wall have since resisted the passing of time. Here is a picture of Puerta de las Pesas, a critical gateway into the city (with a pretty sun “tattoo”).

Ever wonder why the streets in European cities are all windy and sometimes incredibly narrow?! Wonder no more, because as in the case of Spain, cities were intentionally designed en re 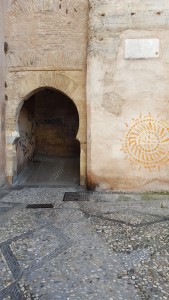 codo, or in bends. This was a defensive measure; horses and soldiers are unable to charge through and attack swiftly if the streets are bending and tight, therefore giving the defense more time and ability to counter the attack. I can’t speak for other European countries, but it wouldn’t surprise me if this idea manifested itself in other locations as well.

This is the tiniest bit of information that I have been learning through my Islamic Art and Architecture course here in Granada. I will spare you the duller aspects of learning a complicated history, but I still want to share about the religious influence and impact the Moors left in Andalusia. As is the case with Catholic cathedrals, Buddhist temples, and other religious constructs, Islamic mosques were built to be spectacular. Key attributes of these mosques include arcs like Roman aqueducts, columns with elaborate and distinct chapiters (column heads), tiling, and ornate plaster decoration. The most significant mosque in Andalusia is in Córdoba: another beautiful city that we as a program visited. 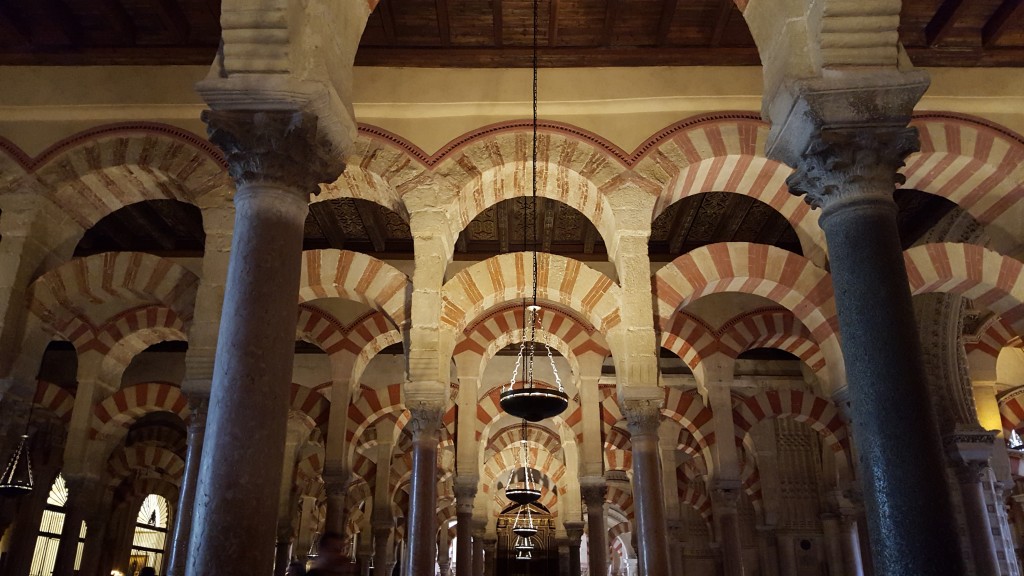 This type of arc was constructed under Abd ar-Rahman I in which the white stone and red bricks alternate to make this famous striped pattern. His successor Abd ar-Rahman II would add onto the mosque, but instead of following this style, he made the arcs all of white stone and painted on red stripes. The chapiters of the columns are called capiteles de pencas. They are imitating the leaves of a specific type of the pencas plant. 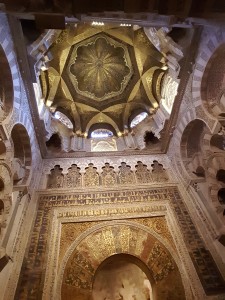 This image is of the mihrab: the Arabic term for the space facing Mecca and designed for prayer. The dome was gorgeous, and the decoration around the mihrab was overwhelming. There are inscriptions of verses from the Koran as well as decorations imitating nature. What I loved most about this mosque was the construction of the building around the concept of light. As you can see in the previous image, the mosque is dimly lit. In fact, apart from occasional windows on the far sides of the building and hanging lanterns (that now are artificially lit with electricity), there is practically no allowing for light in this architecture. There is a reason for that. Light was associated with God. Therefore, the most lit spaces were the most divine, designed for God. In this picture, the dome actually has windows all the way around. This was to fill the space with light, or with God’s presence symbolically, unlike any other spaces in the mosque. Beautiful.

A final place that is truly a source of historical pride for the Moors is the most famous building in Granada: the Alhambra. Literally translating to “the big red one,” the Alhambra was made into a glorious palace by Sultan Yusuf I. After the Reconquista, it became the home of King Ferdinand and Queen Isabela. Every inch of the space is ornately decorated with arcs, columns, tiles, gold inscriptions, plaster detailing, and every other form of wealthy architectural feat you can imagine. In short, the Alhambra is the defining characteristic of Granada and serves as a reminder of Granada’s Moorish roots. 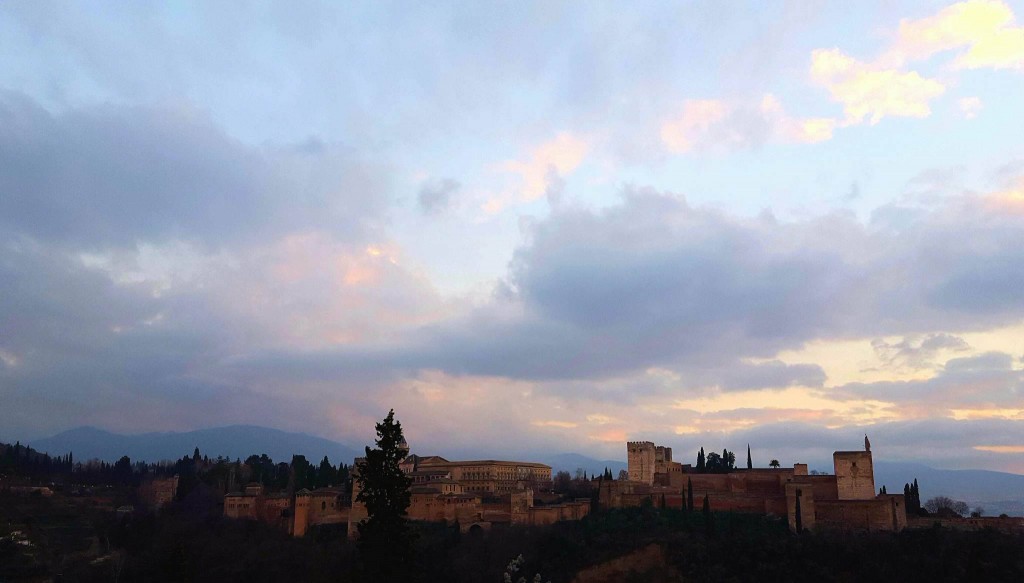 It has been an amazing experience seeing such ancient structures. Heck, touching a marble column crafted hundreds and hundreds of years ago is humbling and foreign. I think we as the collective United States forget how young we are. We are in our adolescence as a nation. We asserted our independence to do things on our own, and still have the anxious energy and curiosity to over involve ourselves like young adults often do (in my opinion). Spain, especially Granada, is relaxed, comfortable with itself, and wise from its years and years of experience. This week has certainly given me a unique perspective about my country and culture as well as a new-found appreciation for learning history.
Micro-bio! This is Kweku Ampem-Darko aka kid with the coolest name. He is a student at Wheaton (in Massachusetts, not Illinois) studying pre-med. He has lived in New York for the past four years and is originally from Ghana. You could say he is living out study abroad inception: study abroad Spain while studying abroad in the United States. He is extremely friendly (and goofy, see photo) and has a natural inclination for leadership, currently being a member or leader of several organizations on his campus. Kweku and I have had se 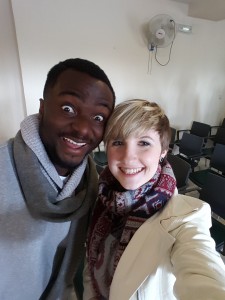 veral interesting conversations and experiences involving Christianity. We took this picture after attending a Spanish Christian church (which was very cool!). We had been talking about how being a Christian is a tricky aspect of our identities. On the one hand, being Christian affects every aspect of our identities; we are children of God. Conversely, identifying as Christian means identifying with a long, and sometimes vicious history of expulsion, murder, racism, and exclusion. “I am a Christian, but I am not the evil that has been done in the name of Christianity. This has been difficult for me to explain.” I couldn’t agree more. This of course is not to say that the entire Christian tradition is founded on evil and corruption! No, Christians have always been improving the world. When negative acts are what are easily remembered, Kweku says identity becomes less comfortable. We certainly had no conclusions but it was a great conversation and one I hope to continue to consider. To end, here is an audio clip from the tiny church we visited. Guess what? Some modern Christian music is universal! This is the Air I Breathe in Spanish: