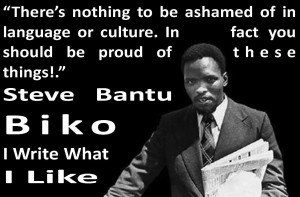 Wanna hear an irony everyone? The more I am in Durban the more I understand white Americans discomfort in entering other cultural spaces. On Monday, October 27th, I went to a Black Consciousness talk about Black Consciousness and democracy. I didn’t really know what to expect, so when the host introduced the first speaker Chumani Maxwele I was really excited. Chumani is one of the leaders of the #Rhodesmustfall and #feesmustfall movements happening currently at the universities in South Africa. Chumani began his talk speaking in Zulu. Now I’m thinking, ok cool eventually he’ll speak in English right? Nope, Zulu all the way! My reaction is two folds of irritation. One, I’m irritated at him for choosing to only speak in Zulu when he knows that everyone who came to hear him doesn’t know Zulu. At the same time, I’m irritated at myself for not knowing more Zulu. And as soon as I mentally processed my irritation, I immediately had to put my English and American privilege in check. I mean was I not at a Black Consciousness talk? Speaking unapologetically in one’s native tongue regardless of who knows it challenges English and white normalcy which is one of the main aims of Black Consciousness especially in South Africa.

Back at Hope when I was in BSU, I would often be frustrated by the constant need to plan events that would be inclusive of everyone i.e. white students, instead of doing whatever we wanted and letting people sit in their discomfort. My rationale was, it’s not your space so just be uncomfortable for an hour. Well friends, in that Black Consciousness talk I had to eat my own words because it was uncomfortable to not know what was going on. For twenty minutes I was an outsider. But here’s the thing, that’s OK. Sometimes the message is not for me and it is a privilege to think that as an American and an English speaker I will be catered to at all times. (Check out the end of my blog on Mozambique for more of my thoughts on language)

As the night continued everyone eventually got into small groups to discuss the presentations by the speakers. At the end each group was asked to have a representative speak for the group summarizing what the group talked about. One of the ladies asked me to speak. I said, “ No, I’m an American.” She looked at me strangely then said, “Ok.” Later she told me, “I’ve never heard an American not speak because they are American.” Her comment made me think about spaces and whose space is it? In that space it’s not my place to voice my opinions. It’s my place to listen and learn. That’s the posture I wish more Americans had because it’s not always for us to speak. Sometimes we need to sit, listen and just live in discomfort. As someone who has been trying to navigate Black African spaces as a Black American, I understand to a degree how difficult it is to live in uncomfortable spaces. You don’t want to offend people but at the same time you want to engage everyone. You want to be equals but you are aware of power dynamics even within a conversation. There may be a language or cultural barrier that you wish you could overcome by learning the language or culture but you don’t want to appropriate or disrespect the culture. At the end of the day, it takes a lot to enter those spaces but you know what we have to. Why? Because not entering uncomfortable spaces gets us nowhere quick. All the above concerns may never change but entering spaces of discomfort changes you. Seeing how it feels on the other side of the privilege coin makes one that much more aware and humble in all future interactions. So maybe I won’t just tell the white students at Hope to suck it up and get over themselves. But I will never stop encouraging people to live in the uncomfortable spaces of life.