The religion class through IES Salamanca takes a field trip every year to Atapuerca and Burgos, Spain. La Sierra de Atapuerca is an archaeological site that contains some of the earliest human remains in Europe. We have been learning about prehistory and the idea of religion during that time, so the perfect place to visit is the most important excavation site in Spain. We left Salamanca promptly at 7 am for our trip. When we arrived, we met up with our archaeologist tour guide and drove over to the site. Most of Atapuerca is closed to the public, but we were able to see three excavation sites. Our guide told us about one area where archaeologists have to crawl through a long and narrow tunnel to reach one area with lots of human remains. At the excavation sites, we could see the stratification of the earth, and our guide pointed out where some of the most important artifacts have been discovered. The guide was great because he tried to keep what he was saying interesting and relevant. He also looked like Ross Geller from Friends, which was pretty perfect.

After we had this part of the tour, we went to an outdoor interactive area where our guide taught us about how people lived during different eras. We went to a station where we learned the important technology of making knives by hitting a rock against another rock. We went to a cave painting station, then a hunting station where everyone had the opportunity to try out some bow and arrows and throw some spears. We ended the interactive part in a hut where our guide made fire out of a couple of pieces of wood and some flint. I’m glad matches were invented, it’s a much easier way to make fire. 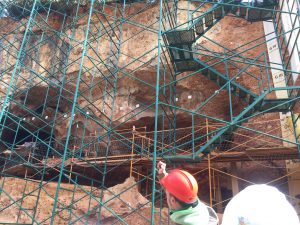 After Atapuerca we took the bus to Burgos for some free time to eat lunch and explore the city. We had the chance to see the cathedral from the outside, and it’s an impressive cathedral. When we met up with the group again we went to the Museum of Human Evolution. This is where some of the real artifacts that were found at Atapuerca are displayed. They have areas that explore the evolution of the brain, the evolution of man, and modern science. It’s an interesting museum, and I would recommend it especially for people interested in science.

It was not a traditional day, but I’m glad I had the opportunity to see that part of Spain!