So a little bit of background: I really like to run so as I’ve been in Paris I’ve made it a habit to go out running a couple days out of the week. Right next to my apartment in Paris is the Bois de Boulogne (see my post La Maison Française for more information) which is where I like to run because it’s a nice change of scenery from the mostly concrete city in which I live. Essentially, it’s a huge park with dirt trails and lots of rocks so it’s definitely best to watch your step. However, one day I was running and I definitely did not look where I was going and, sparing you the not so fun details, I now have a sprained ankle:)

Now, normally a sprained ankle isn’t really that big of a deal because it’ll heal in a couple of weeks and not be a big problem, BUT, that has not been the case for me. A couple of years ago, I sprained the same ankle pretty badly so this new sprain is healing over scar tissue which makes the process much, much longer. It has now been around a month since I’ve royally messed up my ankle and it is still a ways away from being up for anything more than a brisk walk. That being said, in the time that I’ve been sidelined I’ve devised a list of five things that happened after I sprained my ankle (in France!):

1. I learned how to take a break: When I got to Paris I was overwhelmed with all of the things that I wanted to see and do. Up until I sprained my ankle, I was using all my spare time outside of class and on homework to cram everything into the short time that I’m here. The day after I sprained my ankle I spent the entire day in bed and it was so nice! Katherine gave me books on Paris that let me see all of the things that I hadn’t yet been able to see in person. I started reading Harry Potter in French, and spent some much needed time on Netflix. That’s not to say that that is what every day since then has been like, but it definitely showed me that I can still be enjoying my experience here without having to constantly be going somewhere to see something. 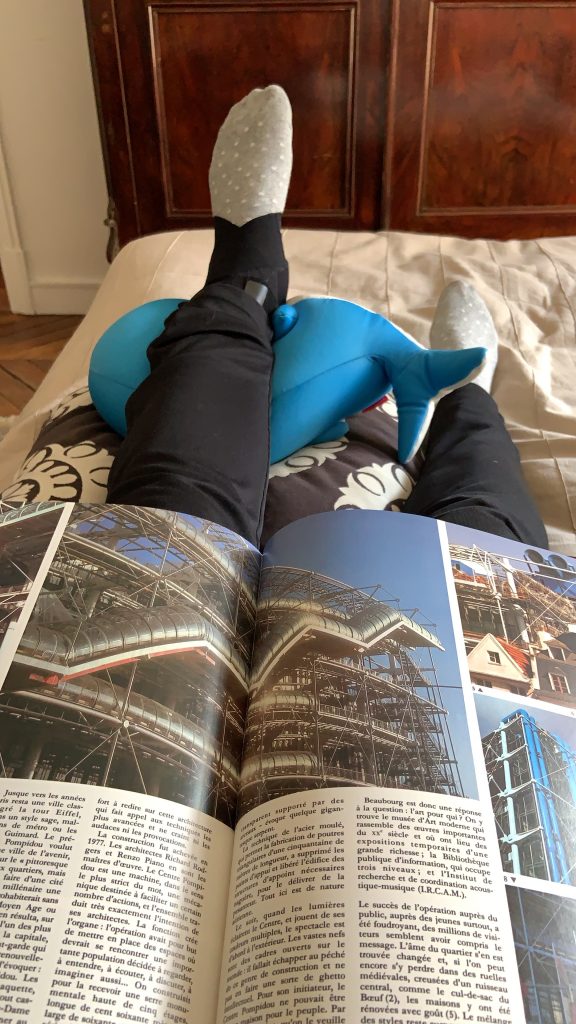 2. I learned to enjoy just walking without a destination: Running was my primary source of exercise when I came to France so I was really upset when, all of a sudden, I couldn’t do that anymore. So, I turned to walking. Instead of just walking around the Bois de Boulogne (I was overwhelmed with a feeling of betrayal from my accident), I opted to walk around and see the sights I hadn’t yet experienced in Paris. I used to be so focused on doing all the touristy spots. However, from just walking around I found so many cute places that, dare I say, are even better than some of the main attractions.

3. I learned that it’s okay to say no: A lot of my friends here really like to go out and explore whenever they have free time. I do too, but sometimes I really just want to be on my own and take things in at my own pace. My ankle gave me an excuse, but gradually I learned that I shouldn’t need one. You are 100% allowed to say no to your friends, and they will understand. Sometimes you just want to be by yourself to think and breathe and there is absolutely nothing wrong with that.

4. I learned SO MUCH FRENCH: Alright so this may be a bit of a strong statement, but right now I feel fairly confident in my language skills and really do feel like I’ve improved. Since I’ve had to spend a lot more time resting at home, I’ve passed a good portion of my time talking with my host mom, Katherine. Meals in France take a long time to make, especially if you have a host mom like mine who loves to talk; which is something I appreciate about her. Normally I would go running in the morning on weekends and would miss eating breakfast with Katherine. However, I couldn’t do that so we have pretty extensive breakfasts and conversations that last long after we’ve finished our bread and coffee. At the start of the semester, I mostly just let her talk because I didn’t understand everything and it was really hard to interject. Now it’s much more of an actual conversation. Mostly we talk about the news since we listen to that on the radio over breakfast, but she also tells me lots of stories from when she was my age. I tell her about my family back home and how things are different there from how they are here.

5. I learned to relax the way Parisians do: While walking I found my way into Jardin du Luxembourg, a massive park on the Left Bank with lots of trees and green space which is hard to come by in Paris. The day that I found it happened to be one of the first really beautiful spring days so, naturally, it was packed with people. Luckily I was able to find an empty lawn chair in the sun and sat there for a couple of hours, just reading my book and enjoying the fresh spring air. 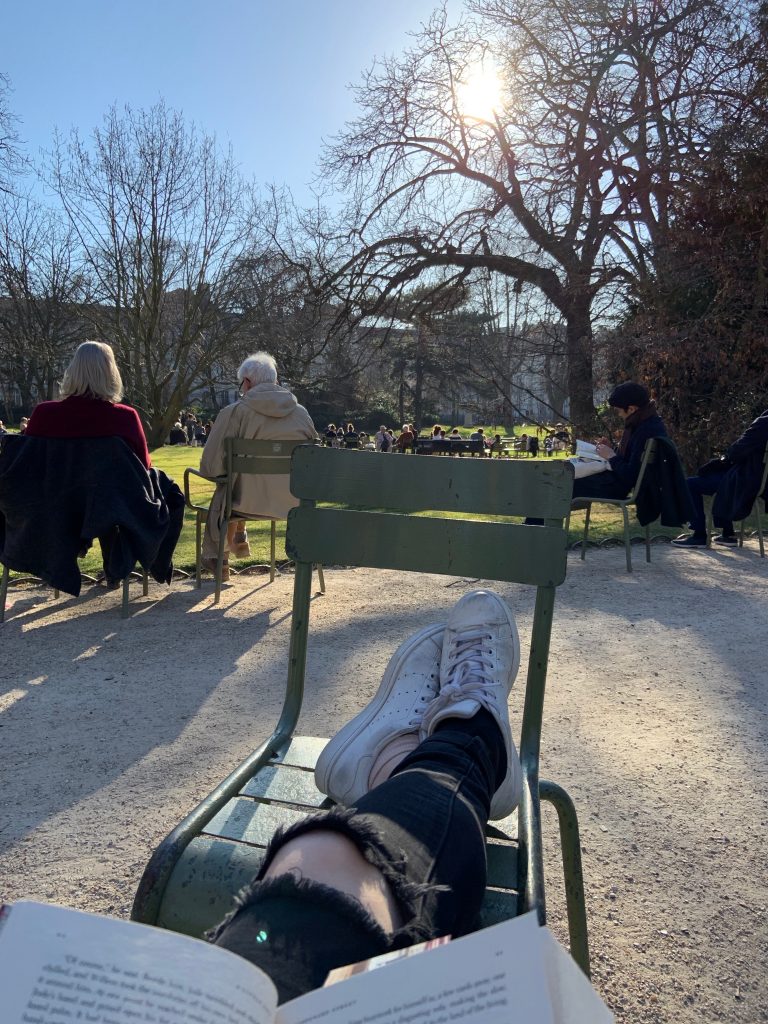 Reading in the Jardin du Luxembourg

This last one reminded me of a conversation I had with my sister, who is also studying abroad this semester. She recounted a story of her sitting near a lake, just relaxing. The sun was shining brightly and the sky a perfectly clear blue. For just a moment when she closed her eyes she told me it felt as if she was back home. A second later she opened her eyes to remind herself that, in fact, she wasn’t anywhere near home. Looking back, I realize that I had the exact same feeling that day in the park and it was incredibly bittersweet. I miss home (a lot), but Paris is my home now, too. Even when I’m gone for just a weekend I find myself wanting to be back in this beautiful city.

Right now my life is divided between Minnesota home, Hope home and Paris home, and running was my constant. It was my way of coping with homesickness and helped me feel a little more at ease with my environment. It was really difficult to suddenly not have that anymore. To be honest, I was really frustrated by what I couldn’t do, but somehow I found experiences that are even better. I’m not saying I’m glad that I messed up my ankle because it has definitely not been fun. Yet, I’m grateful for the new perspective it has given me.