Abstract:  Approximations of the value of pi are known to a ridiculous number of digits.  But to actually establish that pi is not a rational number requires not just approximations, but proof.  The first proof that pi is irrational was given by Lambert in 1761, and it required some sophisticated analysis, but in 1947, Ivan Niven gave a remarkably short and clear proof that pi is irrational using only ideas from calculus. (So it is as easy as pi!) We’ll take a detailed look at Niven’s proof as well as peeks at some of  the history of pi in mathematics.  And of course there will be poetry.

Hope again had a nice turnout of students participating in the Michigan Autumn Take-Home Challenge this past Saturday. Students competed with other students around the state (as well as other states) working in groups on ten interesting problems. Apparently this test was more difficult than usual (or not as easy as pi), so while we look forward to hearing the results in the near future we may not expect them to be very high scores. The following students competed (grouped by team):

David Montague, the Director of the Memphis Teacher Residency (MTR), will be on campus next Wednesday, November 14th to speak in Chapel and recruit for MTR. He is also hosting an Information Session on that same day from 6:30-7:30pm in VNZ 247.

Problem Solvers of the Fortnight

Congratulations to Cole Persch, Evan Bright, Holly Denouden, and Caleb Stuckey– all of whom correctly solved the Problem of the Fortnight in the last issue of America’s premiere fortnightly mathematics department newsblog.

Problem of the Fortnight

Write your solution on a paper plate turkey (paper hand turkeys will also be accepted) and drop it in the Problem of the Fortnight Slot outside Professor Mark Pearson’s office, room 212 in The Werf, by 3:00 p.m. on Friday, November 16. We are hoping for a rafter of turkeys to appear in the Problem of the Fortnight slot next week! As always, be sure to include your name and the name(s) of your math professor(s) – e.g. Tom Gobbler, Professor Herb Stuffing – on your solution.  Good luck and have fun!

Elvis was in the building during this week’s colloquium 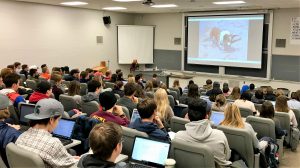