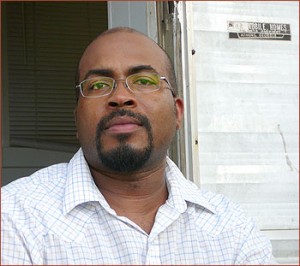 This semester’s first installment of the Jack Ridl Visiting Writers Series will feature poets Elizabeth Bradfield and Sean Hill. Both will give readings of their work on Feb. 10 at 7 p.m. in the Knickerbocker Theatre.

Bradfield has released two books of her poetry: Interpretive Work, which received the Audre Lorde Award, and Approaching Ice. Her poems have also appeared in The Atlantic Monthly, Poetry, Orion, among other journals. Reviews of her work are available through Literature Online and OneFile PowerSearch. Hill’s work has been published in Callaloo, Ploughshares, and The Oxford American in addition to other literary journals and anthologies. His book, Blood Ties & Brown Liquor, came out in 2008. Two of his poems, Hands 1921 and Elegy for an Older Brother 1922 can be found through Literature Online.

Bradfield and Hill also work on a project called Broadsided. Bradfield came up with the idea for Broadsided in 2005. Each month, Bradfield, Hill, and the other editors chose one short literary work from a field of submissions. They then ask an artist to create artwork based on the piece. The two works are then put together on a letter-sized document and posted online. Anyone interested in the project is encouraged to download the document from Broadsided’s website and post it in a public place. According to the project’s website, broadsides have been posted locally in Saugatuck and Grand Rapids.