Student library workers are an important part of Van Wylen. Almost a hundred students support various aspects of library operations every semester. Here are four of the many students who help make the library a useful place to study and research: 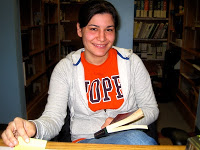 Maria E. (’10) has worked in the library since her freshman year. She helps with shelving, checking books in and out, reserves, finding missing items, and assisting the public. She also works at Cup & Chaucer. She considers looking at the books Van Wylen has to be the best part about her job. 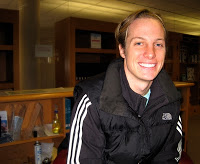 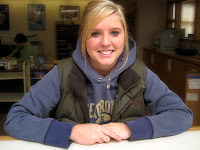 Kayla R. (’12) has worked at the media desk for one semester. Like Maria, she also checks books in and out and does shelving, but as a media desk staffer she is also involved with things such as laminating. Her favorite part about the job is being able to interact with people. 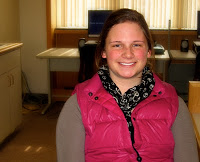 Emily A. (’13) began working for the library last November. As a student worker in the TechLab, she helps people with software questions and assists those who come into use the TechLab computers, which feature software and applications not found on most Hope College computers. She enjoys helping people and figuring out solutions to problems people may have with unfamiliar software.