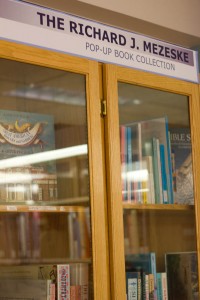 The former home of the puppets in the curriculum library on the second floor has new inhabitants: a collection of pop up books donated to the library by retired education professor, Dr. Richard Mezeske.T

Mezeske began collecting pop up books over thirty years ago when his children were young. While he worked towards his master’s degree in reading instruction at Michigan State University, he learned about Lothar Meggendorfer and Ernest Nister, two of the founders of the mechanical book genre. From there, he began to collect more and more books.

“Once I read a fairly thick history of pop-up and mechanical books, I was hooked and the collection took off,” Mezeske said. “My dream is to one day make a reservation at the British Library in London to view its collection which goes back to the 17th and 18th centuries.”

Mezeske purchased many of his books in England and on various family vacations. He also received books from colleagues who discovered them while traveling.

Though Mezeske’s collection is large, he does have two particular books that he enjoys the most.

“My absolute favorites are The Human Body and The Facts of LIfe, both of which were published in conjunction with a PBC television series from the early 1970s,” Mezeske said. “Because the mechanical illustrations are so well done , these books were actually used in medical schools.”

Be sure to stop by the curriculum library sometime to view Dr. Mezeske’s collection of books.