Many of you may have noticed the absence of Mathilde, the marble bust that resides next to the interior front doors of Van Wylen. This week Mathilde returned to her home after being restored and appraised by Kari Miller-Fenwood, Peter Fenwood, and Walker Glass, of Kari Miller Restoration. They carefully cleaned away years of accumulated grime and removed and restored some older repair work on the base. Mathilde is now installed inside a plexiglass case that will protect her from the elements. 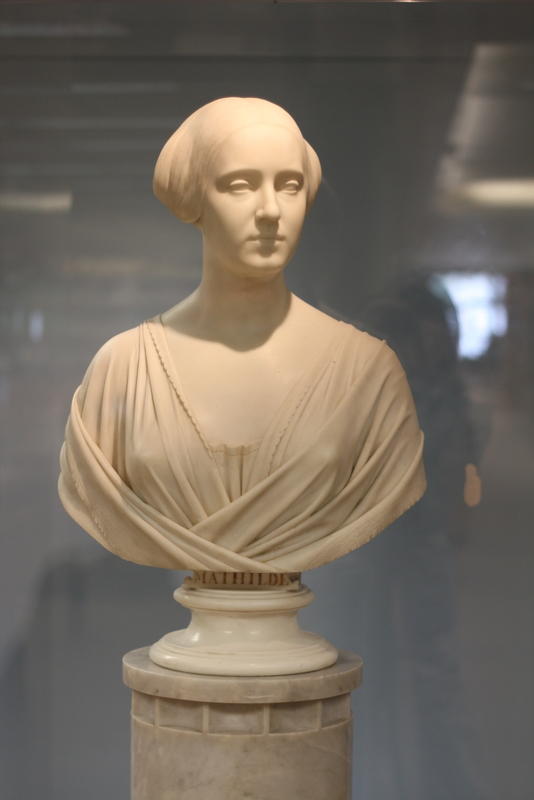 Mathilde was created by esteemed 19th-century American sculptor Hiram Powers. Powers was born a farmer’s son in rural Vermont. Though he received only limited formal art training when he began working as a sculptor in his twenties, his natural talents allowed him to quickly gain a reputation as portraitist. He was launched on the Washington DC social scene by his bust of President Andrew Jackson. From there, he moved to Florence, Italy in order to further his artistic education.

A savvy businessman, he was able to maintain a successful studio through his portrait bust work and the popularity of his mythological busts and full length sculptures. The most famous of these was his Greek Slave, which caught the public sentiment at a time when abolition was hotly debated. He sculpted Princess Mathilde Bonaparte Demidoff, niece of Napoleon, in 1845. For more information on Mathilde, see this post. 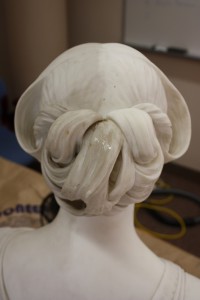 Mathilde was given to Hope College by Maurice Kawashima. Mr. Kawashima also donated to Hope an exquisite collection of Japanese ceramics, many of which are on display in the library. See this earlier post for more information on Mr. Kawashima.

Matilda was acquired and owned by Richard Wunder. Wunder was an art scholar, connoisseur, and curator who worked at such established institutions as Harvard’s Fogg Art Museum, the Smithsonian, the Cooper Hewitt Museum of Design and Christie’s New York office. He was a specialist in the work of Hiram Powers, writing three books on the sculptor, including Hiram Powers: Vermont Sculptor, 1805-1873. Van Wylen Library received all of Wunder’s materials and notes from his research on this book, as well as Wunder’s collection of other Powers collectables, such as books from Power’s personal library. Wunder also donated over 15,000 books from his own collection, primarily in the arts. Please contact Kelly Jacobsma (jacobsma@hope.edu) for information on using Wunder’s research collection.