Some people call it “summer camp for librarians.” I would never use this phrase to describe Rare Book School, and not only because I have way too much style to do so. RBS, a well-known program which operates out of the Alderman Library at the University of Virginia, is much more than that. It is, simply put, a unique opportunity to delve into what might be called book archaeology. (It is also not restricted to librarians.)

Last week, I had the chance to attend RBS, where I took a course on the early history of printed books in Europe. It was a packed five days: stimulating lectures; demonstrations of type founding, composing, and printing – including my own use of a hand-press to print my own small octavo (8 leaf) booklet; and hours of time spent in the world-class special collections of UVA (which boast, among many other rare incunables, two  printings of the Hypnerotomachia Poliphili, a dazzlingly bizarre, 15th-century rendition of a shady monk’s (1)  lovesick dream written in a turgid mix of coined Latin, Greek, and Italian, and filled with unusual (and frequently suggestive) woodcut illustrations).

Class sizes are kept intentionally small – about 12 students are admitted to each – and each course focuses on its own set of themes, which range from preservation to bibliography to typography to history. Though courses only run for five days, RBS offers them throughout the summer both at the UVA headquarters and at Yale (which, of course, is home to its own extensive special collections).

I find that what this week seems to have sparked in me most generally is a rather different way of thinking about how I interact with books. Traditionally – and perhaps this is a fault in someone who is supposed to be a librarian and a devotee of archaic texts – I have been a narrowly content-focused reader. Vital as content is, I realize that I have spent relatively little time giving serious consideration to the material aspects of the books with which I come into contact.

One truth that has really seized me is the irreality of the notion of “copy” when it comes to books printed by hand. I have always had a dim awareness that, like hand-copied texts, early printed books must have certain slight differences between them even when they are printings of the same book. However, actually examining these materials has prompted me to realize how important and how fascinating these “slight” differences can be.

Differences between printings – mistakes, for example – can actually provide a rare point of entry into appreciating the in-situ life of a book as it was printed, which offers us insight into the living human component of early book production. For example, what does it mean if the pages of a book are partially out of order? Since books were printed in standard page arrangements depending on size (2), pages in the wrong order could mean either sloppy arrangement of plates or sloppy folding of sheets. In either case, one wonders what was happening in the print shop.

An even better example of this “hidden” life of printed books is evident in the early editions of Shakespeare’s plays. Many of us are familiar with the 1623 and subsequent printings (in large folio), published, as Jaggard (publisher) and Heminge and Condell (actors and posthumous editors) would have it, “according to the true originall copies.” Fewer think much about the earlier printed versions of the plays, which were printed in the smaller quarto format. Those who brought out the first folio editions insisted that these earlier quartos were illegitimate, and of dubious provenance, whereas their 1623 editions were truer to what Shakespeare actually wrote.

A comparison of a few of the different versions – which was possible for me at RBS – does indeed show serious differences between the different formats, even in the titles of individual plays in some cases. But the question of “legitimacy” remains difficult. Consider, for example, cases where the earlier quarto version simply makes more sense than the later folio. The fact is that it seems all printings of these plays were subject to certain difficulties: Heminge and Condell themselves had to cobble together their “true” versions from a combination of memory and the piecemeal collation of scattered surviving scripts. In the absence of truly authoritative, “authorized” copies, Shakespeare’s exact authorial intentions at times must be negotiated between competing texts.

Certainly, there is also much more to early printing than just text. Some of the more deceptively obvious elements of hand-press books are images. Woodcuts, which might look like simple line drawings, hide a tremendous amount of delicate work: they had to be cut in negative, meaning the image had to be teased out of the block itself by cutting away everything but the lines. Besides woodcuts, blocks were also etched and engraved, and different textures were achieved by using different tools oriented with or across the wood grain. Other forms of book illustration, such as engraving and etching on copper, also used several complex techniques. An excellent example of one of these is the image below, The Sudarium, executed by Claude Mellan in the mid-17th century. 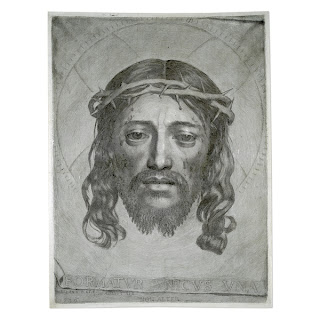 Courtesy of the British Museum

All of the detail in the image (3) is accomplished by varying the pressure applied to a metal stylus (burin) as the plate was slowly rotated: there is only a single spiraling line!

I feel I could pick any number of other topics to illustrate how a single week at RBS has influenced my thinking on books as objects, but I’ll stay myself. I think I’ll be drawing on what I’ve learned and making new connections for quite a while because of my immersive learning experience at RBS. I very much hope to visit again for a different course, and I would recommend to anyone with a shred of interest in exploring the intricate history of the book to check it out for yourself.

(1) Francesco Colunna. The title is usually rendered in English as something along the lines of “The strife of love in a dream.” The story itself describes Colunna’s dreambound attempts to find his lover (Polia) in a mythically-infused landscape full of sensual imagery. Notably, he only succeeds after falling asleep and dreaming a second dream within the first – an anticipation of Inception by roughly 500 years. The book remains a monument of humanistic thought.

(3) Sometimes called St. Veronica’s Veil, this is a depiction of the face of Jesus, supposedly impressed on a cloth he used to wipe his face while walking to be crucified. The cloth itself may still be somewhere in St. Peter’s.