The display case near the computers on the first floor of the library currently houses a first-edition copy of George Sale’s The Koran; commonly called the Alcoran of Mohammed. This text is a full-length English version of the Koran, the sacred text of Islam. 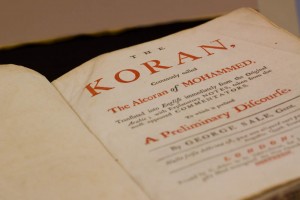 Sale published the first edition of this text in 1734. According to an article in the July/August 2011 issue of Saudi Aramco World, Sale learned Arabic while translating the New Testament of the Bible into Arabic for Syrian Christians. The experience inspired him to write an English version of the Koran. Sale’s version is particularly unique because he translated the text directly from Arabic. Most previous English translations of the Koran came from French or Latin translations. The first edition of the book includes an introduction on the Koran, Christianity and Judaism along with an engraved map of Arabia, a plan of the Great Mosque of Mecca and three genealogical plates.

Thomas Jefferson once owned a second-edition copy of Sale’s translation of the Koran. He, like Sale, found the text to be useful in legal study. Jefferson’s copy is now in the Library of Congress.

Though the text is a translated version of the Koran from its original Arabic, it, along with other translations of the Koran, is commonly referred to as an interpretation rather than a translation. Because Muslims believe Muhammed received the Koran in Arabic, Arabic is the only language used for recitation and reading of the Koran.

Van Wylen’s copy of Sale’s translation came from Dr. William Elliot Griffis, who donated 700 books to Hope between 1880 and 1913.