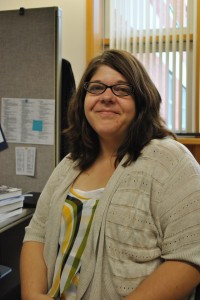 Van Wylen Library would like to welcome Brianne Hagen to the library faculty.

Brianne is the library’s new metadata librarian in the Technical Services and Systems Department at Van Wylen. As the metadata librarian, Brianne will connect library users with both print and digital collections using emerging metadata standards and traditional cataloging. She will also be working with the library’s Digital Commons, a repository of creative and scholarly work of the Hope College community.

Originally from Michigan City, Indiana, Brianne graduated this past May with her Master’s in Library and Informaton Science from Indiana University-Purdue University Indianapolis. While studying at IUPI, she worked at the archives on campus, the law school library, and volunteered at the Indiana State Library.

Drawing from her broad range of experiences in libraries, Brianne gravitated towards the technical side of things. To her, “Bad information is worthless.” Part of her job as a metadata librarian is to make it easier for library users to find information, whether it be through better indexing for catalog searches or digitization projects like the recent Hope Milestone project.

Brianne is excited to become a part of the Hope community and looks forward to “working with a great team” at Van Wylen.

Brianne can be reached at hagen@hope.edu.