We are offering extended hours this week for your studying pleasure!

English professors Dr. Jesus Montaño and Dr. Regan Postma-Montaño made a list of the “25 books by Latinx and Latin American Authors That Every College Student Should Know!” All the books have been gathered at the display on the 2nd floor near the stairwell. The list includes this year’s Big Read title In the Time of Butterflies by Julia Alvarez!

We hope you get a chance to read at least one of these books before October 15. It’s important to read books from a variety of voices to help understand the human experience more fully! Thank you to our campus partners for helping to curate this display!

The Hope College Van Wylen Library has received a gift of four very rare Dutch books, printed between 1669 and 1738, and all are related to exploration and travel. A gift from Keith Miller, grandson of Herman Miller, the books represent a particular place and period in the history of printing when European readers had a voracious appetite for books about other peoples, places and religions.

The titles (approximate translations into English) of the four books are:

Atlas Japannensis or Memorable Embassies of the Dutch East India Company to the Emperors of Japan by Arnoldus Montanus. Published by Jacob van Meurs, Amsterdam, 1669.  This is the first major non-Jesuit work about Japan after the closing of Japan to non-Dutch Europeans in 1640.

An Embassy from the East India Company of the United Provinces to the Grand Tartar Cham Emperor of China by Jan Nieuhoff, published by Jacob van Meurs, Amsterdam, 3rd edition,1670. This was the first extensively illustrated book describing China. First published in 1665. The accounts were based on the journals of Johan Nieuhf, who had embarked on a quasi-official embassy to the imperial court in Beijing nearly a decade earlier; the book is comprised of several texts, many of them derived from earlier Jesuit sources.

A Voyage to the Levant: or, Travels in the Principal Parts of Asia Minor by M. Corneille le Bruyn. Published by H. van Krooneveld, Deft, 1698. Dutch painter and traveller Cornelious de Bruyn travelled to Constantinople and throughout the Levant and the Ottoman empire between 1677 and 1685. This region today would be Iraq, Syria, Lebanon, Cyprus, Turkey, Israel, Jordan, and Palestine.

The Ceremonies and Religious Customes of the Various Nations of the Known World; together with historical annotations and several curious discourses by Jean Frederic Bernard, Bernard Picart and Abraham Moubach. Published in Gravenhage, Amsterdam and Rotterdam by Van der Kloot, Uytwerf, and Beman; 1727-1738  in 7 volumes). Considered the most famous encyclopedic work on religion of the 18th century, it was later called the first global vision of religion. The seven volumes include extensive engravings by Bernard Picart, one of the most famous engravers of the 18th century. Vol. 1 Jews/Catholics Vol 2 Catholics Vol 3 Americas, Vol 4 India, Asia, Africa, Vol 5 Greek Orthodox, Protestants, Vol 6 Anglicans, Quakers, Deists, Vol 7 Islam.

The fact that all four books were owned by Herman Miller, the President of the Herman Miller Furniture Company,  raises a number of interesting questions. It is unknown how he acquired them, but I like to think that they were owned originally by a single individual.

So significant are each of these books that they have themselves been the subject of a number of books and articles. In The Book that Changed Europe (Hunt, Jacob and Mijnhardt, Harvard University Press,2010), the authors describe Religious Ceremonies of the World as “marking a major turning point in European attitudes toward religious belief and hence the sacred. It sowed the radical idea that religions could be compared on equal terms, and therefore that all religions were equally worthy of respect — and criticism.” The books offer incredible insight into eighteenth century views of religion and especially of religious tolerance.

The author and illustrator of A Voyage to the Levant, Corneille le Bruyn, is the subject of a book chapter theorizing that he was likely a spy, and possibly involved in a politically motivated murder of a Dutch statesman.

Hope student Aine O’Conner will be using the Bernard and Picart book on Ceremonies and Religious Customes in her research for an independent study this fall.

When published, The Ceremonies and Religious Customes of the Various Nations of the Known World was sold primarily by subscription for 150 florins, probably about $9,000 in today’s money.

The fact that all four books were owned by Herman Miller, the President of the Herman Miller Furniture Company,  raises a number of interesting questions. It is unknown how he acquired them, but I like to think that they were owned originally by a single individual. Such a person would have likely had an extensive library and was probably quite wealthy. When published, The Ceremonies and Religious Customes of the Various Nations of the Known World was sold primarily by subscription for 150 florins, probably about $9,000 in today’s money.

We are so happy to have new and returning students on campus! This will be a great year.

The library can assist you in many ways. Though we have thousands of books you can check out, we also have a number of services and spaces to help you excel this year.

Stop in at the Research Help Desk for assistance on finding sources for your paper or project topic. You can also make an appointment with a Research and Instruction Librarian.

Color printing and office supplies for sale; cameras, headphones and laptops to check out! This is just the tip of the iceberg! Chances are, Media Services has what you need to get going on your project. Check here for an up-to-date list of available equipment.

Studying alone or with a group? We have many different kinds of spaces on all floors for you to use. We love to see the library full of students as well as faculty and staff!

Last week, we celebrated our senior student workers with a luncheon at Alpen Rose. Many have worked at the library all four years. We enjoy getting to know these students and appreciate everything they do to help keep the Library running! 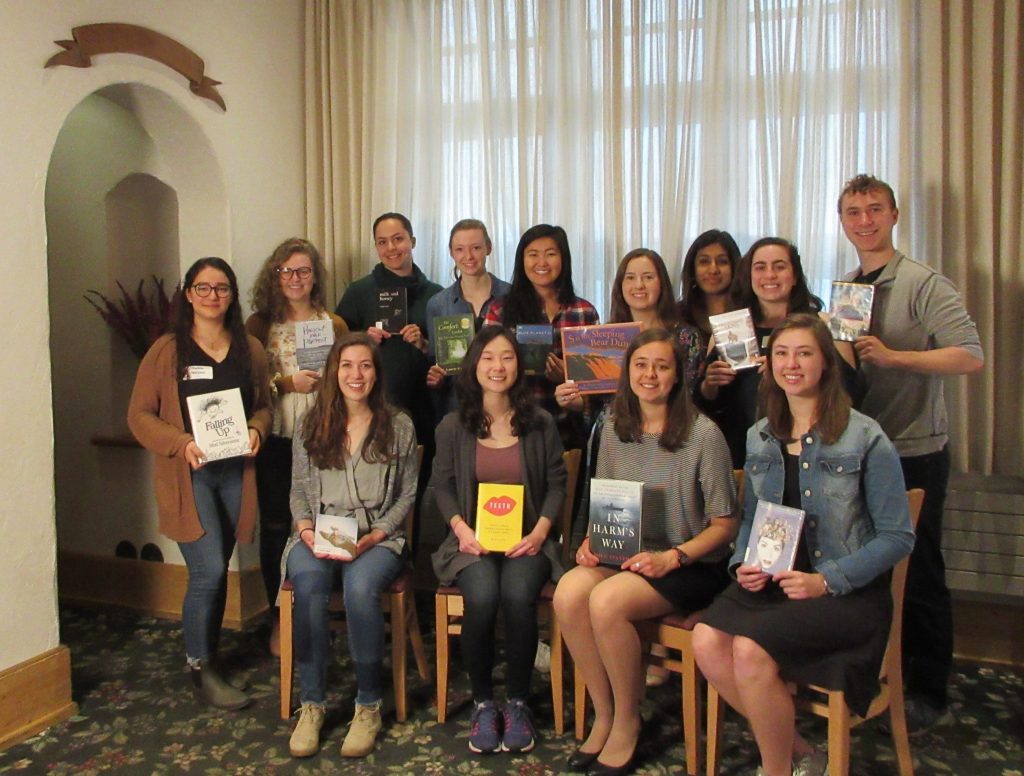 In appreciation for all they do for the Library, every spring, graduating senior student workers are able to choose an item (book, CD, or DVD) to add to our collection. That item might be in the student’s discipline of study or from a different area of interest.

We redistributed our exam week hours a bit to meet demand.  We close at midnight Wednesday and open an hour earlier (9 am) on both Saturday and Sunday! Best of luck with exams and have a great summer!

Bring your ID to the library…you’ll need it to check out books, laptops and DVDs anyway!

Keycard access is now in effect at the Library between 8:00 pm and 11:50 pm Sunday-Thursday.  This applies to both the front doors as well as the 2nd floor doors from VanZoren. 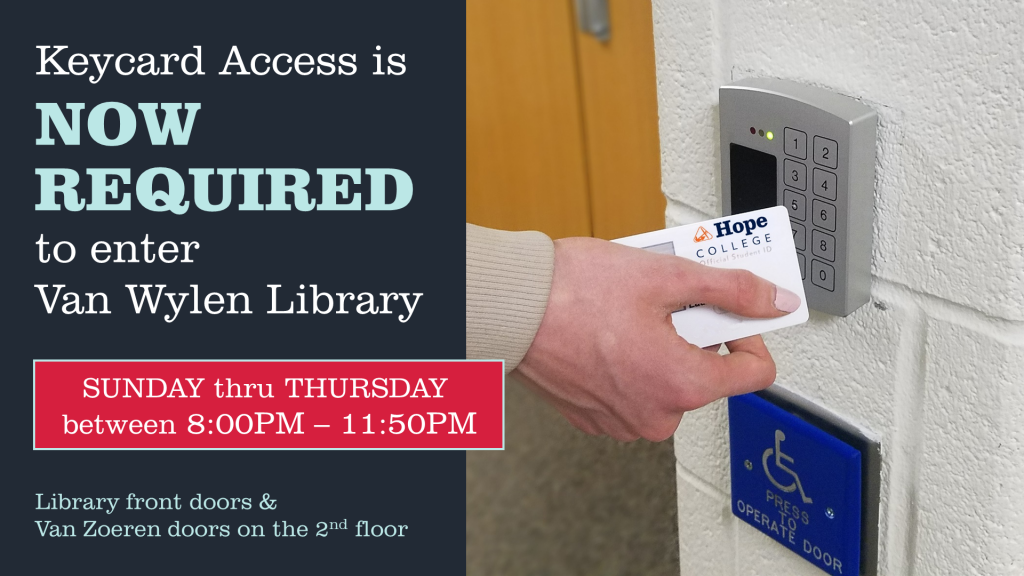 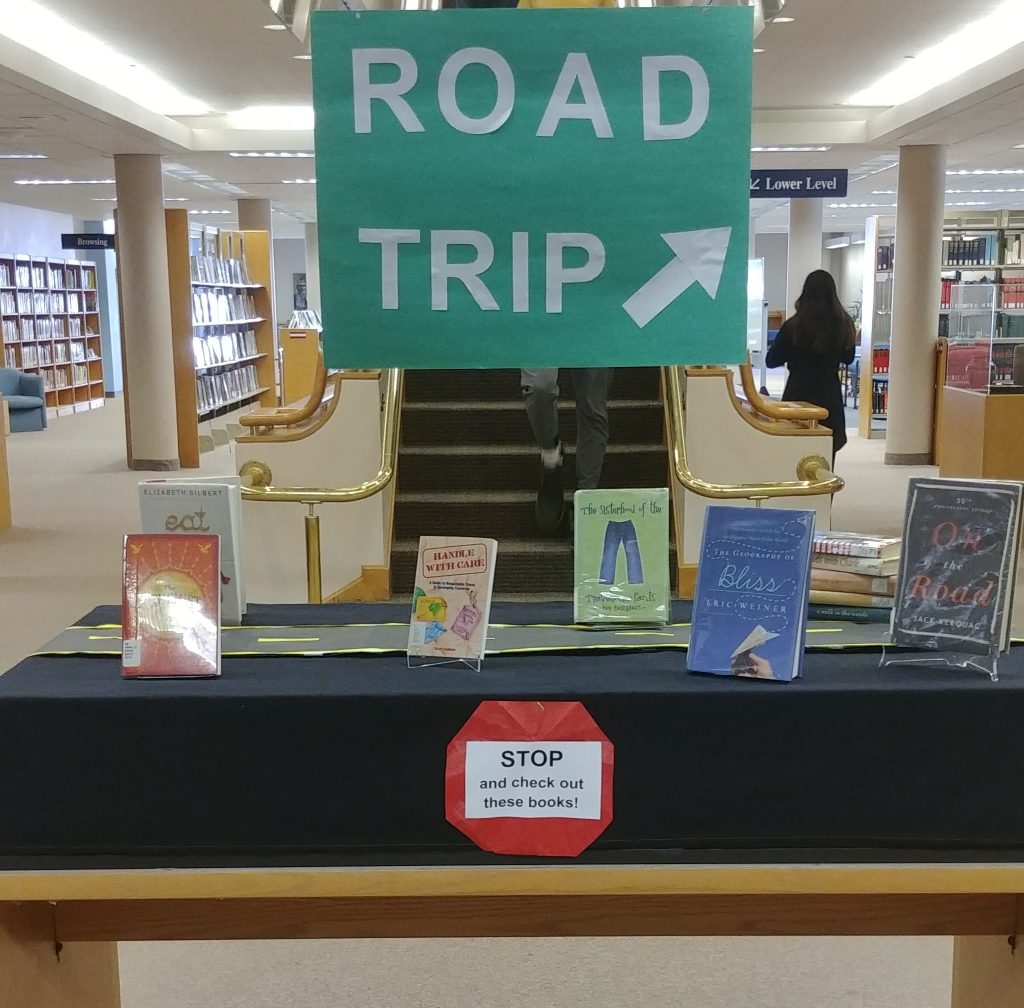