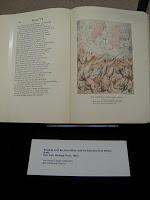 In addition to fifteenth and sixteenth century bibles, Van Wylen Library’s Manifold Greatness exhibit also has several other rare documents on display that have been influenced by the King James Bible.

Many of Shakespeare’s works include Biblical references. Van Wylen Library has a leaf from the second folio of Love’s Labour Lost that demonstrates this. This leaf has the part of the text from Act V, Scene II of this play and includes the line “They will, they will, God knows/ And leap for joy, though they are lame with blows.” The phrase “leape ye for joy” appears in Luke 6:23 of the Bishop’s Bible, one of the versions of the Bible Shakespeare used in his references. No other version of the Bible at the time contained that phrase. The King James Bible, however, picked up the phrase from the Bishop’s Bible and made it popular after 1611. 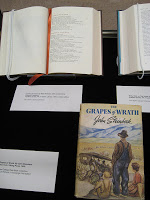 Shakespeare was not the only literary giant whose works show Biblical influences. In addition to the folio, Van Wylen has copies of rare editions of several classic works, including Paradise Lost by John Milton, The Pilgrim’s Progress by John Bunyan, Moby Dick by Herman Melville, Grapes of Wrath by John Steinbeck and Leaves of Grass by Walt Whitman. These books are displayed to show the ways they were influenced by the King James Bible. The Manifold Greatness website has a timeline with information on other literary works that have been influenced by the King James Bible.