Another recently updated display in Van Wylen Library is the Japanese ceramics display, located on the first floor to the left of the staircase. The bowl and platter that are currently featured were both created by artist Ito Motohiko. Though interested in drawing as a child, Motohiko studied ceramics at Tokyo Art University and has since won prizes and been featured in department stores and one-man shows in both Japan and other countries. One of the distinctive features of Motohiko’s artwork is the textured, cheesecloth-impressed surface that can be seen on his ceramics. Other characteristics of Motohiko’s work include autumn maple leaves, flowers, grasses, and bamboo, in addition to other nature-inspired decorations. 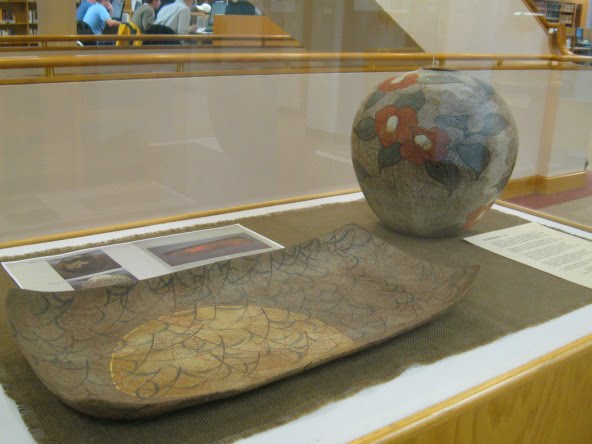 Hope College came to own these ceramics through a donation from Maurice M. Kawashima. Kawashima was born in Tokyo, Japan. He earned his bachelor’s degree at Bunka Fashion College in Tokyo before moving to the United States, where he earned an associate’s degree from the Fashion Institute of Technology and a certificate in fashion design from Parson’s School of Design, both in New York City. He was a professor at FIT for fifteen years and started his own fashion company, Masaaki New York, in addition to working as a designer for other clothing lines. He has a particular interest in ceramics due to their cultural importance in daily life in Japan. In 1999, Hope awarded Kawashima with an honorary Doctor of Letters degree.