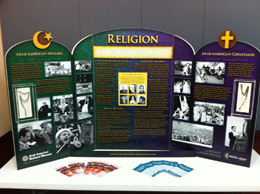 Muslim Americans currently make up only .3 percent of the American population; however, according to the Pew Forum on Religion and Public Life, the world’s Muslim population will grow by approximately 35 percent in the next 20 years. Many Americans find themselves unsure of Islam’s relationship to Christianity, Judaism and other religions. What are the differences and similarities?

Kicking off the exhibit on January 21st at 4 p.m. will be a lecture by David A. Serio entitled “Islam and Muslim Americans” in Graves Hall’s Winants Auditorium.

Serio, an educator with the Arab American Museum, will focus on different aspects of Islam: practices, the Quran, the five pillars of Islam, holidays, sacred cities, and Muslim American demographics. There will be an opportunity for audience members to ask questions.

If this topic interests you, be sure to check out Van Wylen’s collection for more resources, or the Critical Issues Symposium 2011 Exploring Islam libguide, which has links to books, videos, and reports.