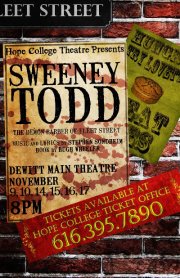 With music and lyrics by Stephen Sondheim, the “musical thriller” is based on the 1973 play of the same name. It tells the story of Benjamin Barker, aka Sweeney Todd, who is falsely sentenced to a penal colony by a corrupt judge.  When he returns to London, he learns that his wife poisoned herself as a result of being raped by the judge, and he decides to use his skills as a barber to exact revenge on him and any others who stand in his way.

Van Wylen Library has many resources related to the musical. Copies of one of the original serialized story versions, films, and musical soundtracks can all be found in the library’s collection. To learn more about Sondheim or to read/listen to his other works, check out these resources.

Tickets for “Sweeney Todd” are $10 for regular admission, $7 for senior citizens and Hope faculty and staff, and $5 for students, and are available at the DeVos Fieldhouse ticket office.