I had the most amazing weekend! It felt good to get away from class for a little while and see more of Spain! On Thursday morning we left early to take the bus to a small mountaintop city called Ronda. Although it was a place I’d never heard of before, I was curious to see what it had to offer.

After a short-ish bus ride,  the first place we went was the Plaza de Toros. This is the oldest bullring in Spain made entirely of stone. I didn’t expect to stay for too long because how much is there to really see in an old circle stadium with a dirt floor? However, we stayed for quite some time just sitting and absorbing everything around us. We people-watched, took pictures, and even ate our sandwiches up in the seats. While I was munchin’ on my ham and cheese on white, I thought about all the crowds that had sat in those seats before me. I don’t think it had really sunk in until that moment how old of a building we were sitting in, but those curved walls have stories to tell of many bullfights past. 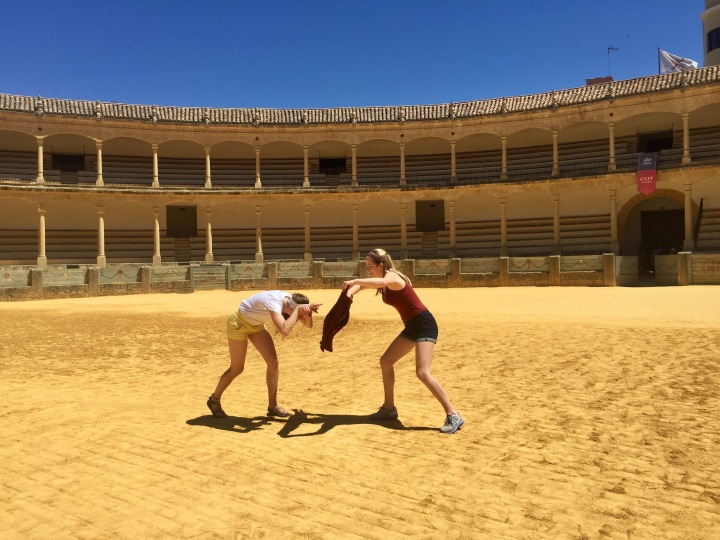 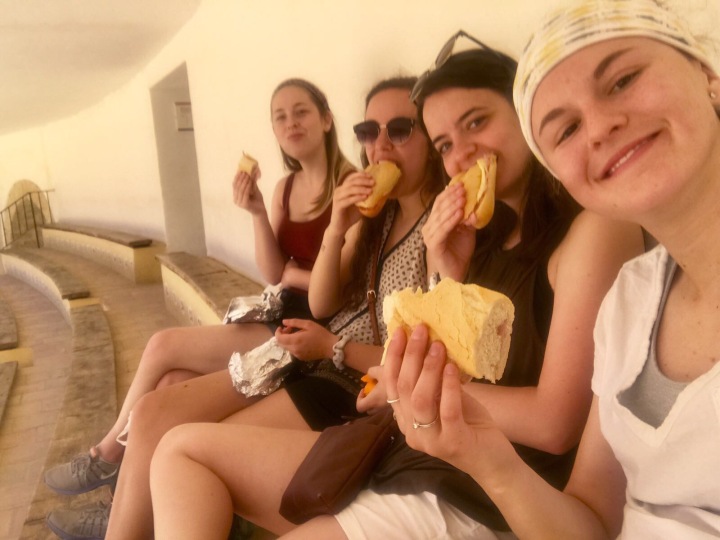 Once we had gotten our fill of the Plaza de Toros, we walked right onto Ronda’s biggest attraction. Puente Nuevo is the bridge in Ronda that connects the town across the approximately 390 ft. deep Tajo Gorge. It is an amazing architectural feat! I honestly cannot figure out how they built something so challenging. No picture that I took truly shows how high up the town sits, but peering over the edge was chilling. As we were looking down at sudden death, we noticed the river that runs through the gorge. One of my friends wondered aloud if we could somehow get down to the bottom, and she was answered by a perfect stranger who just happened to speak English. The nice man told us that if we visited the Palacio del Rey Moro (Palace of the Moorish King), we could hike the stairs down the Secret Mine and get to the bottom of the gorge. 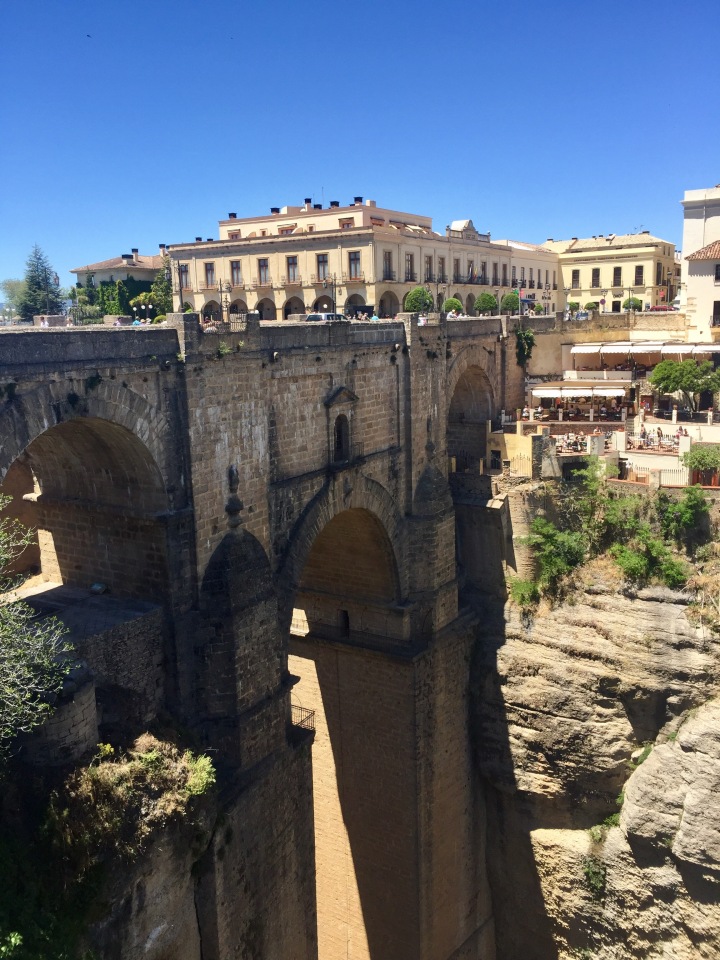 That was too cool of an offer to pass up, so we thanked the man for eavesdropping, and we were off to the next adventure. Let’s put get one thing on the record, my body is not made for stairs. First of all, I have a million and one muscle/alignment issues. Second, my lungs get mad at me when I move too much, too quickly (thank you, asthma). Despite these clearly obvious reasons that I probably shouldn’t have climbed down 231 stone steps with a heavy backpack, I did anyways. Once we got down there, the serenity of the river and beautiful rocks of the gorge made me forget about my 231 step journey back to civilization, but not for long. The climb back up, although brisk, was slightly more difficult than the trip down. I did find myself needing to use the trusty old inhaler back up at the top, but that’s what it’s for, right?. In hindsight, I’m definitely glad I went down because who knows if I’ll ever be in Ronda again. 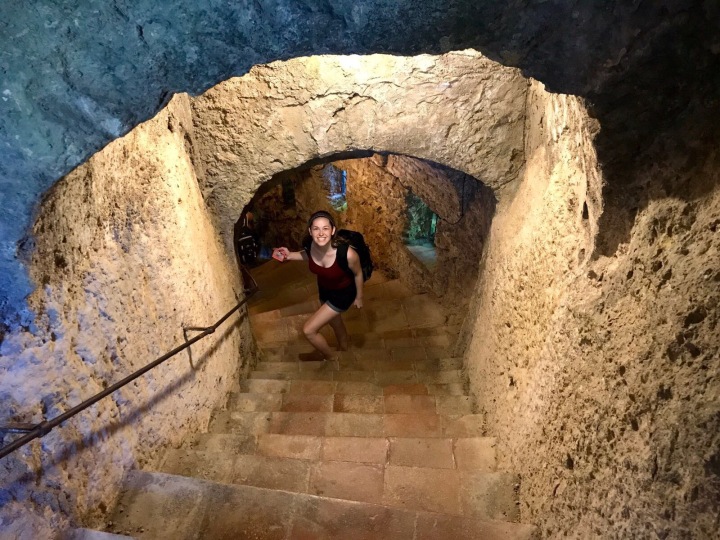 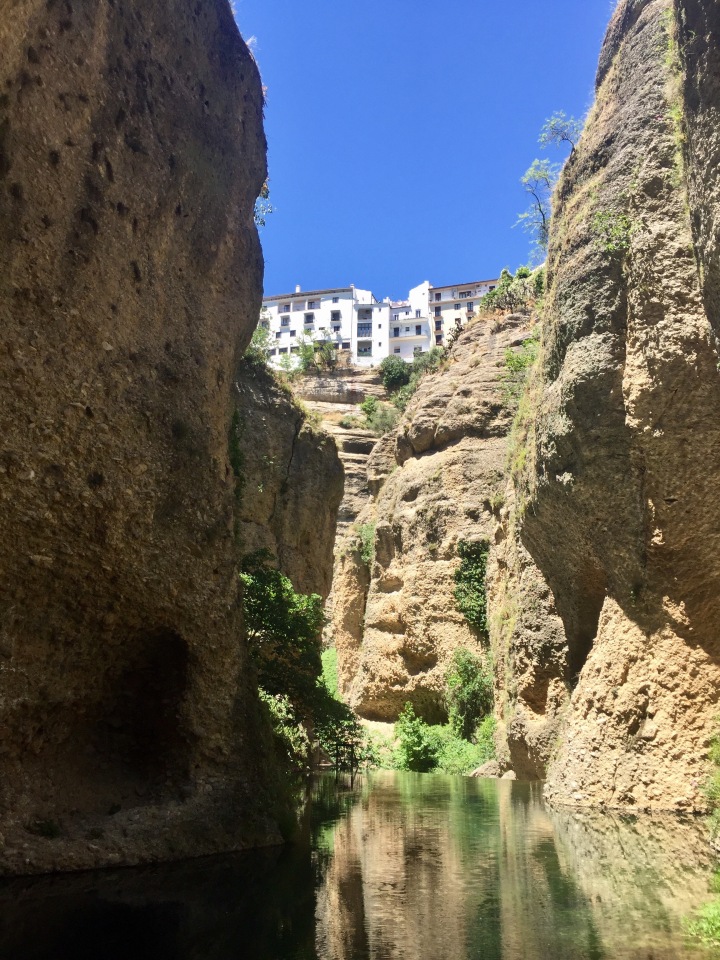 For the remainder of the day before catching a bus to Seville, we re-energized with some food, walked around the cheesy Ronda gift shops, and tried to get to the best picture-taking spot of the bridge. Instead, we found our path blocked by a film crew for the American TV series “Berlin Station.” Even though I was slightly disappointed by the fact that I wouldn’t get “the” picture of Ronda’s bridge, I think it was God’s way of telling me that I had done enough hiking for the day. With a tired body and a phone full of amazing pictures, I climbed into the bus and immediately fell asleep. Day 1 of Long Weekend with No Supervision: Success! 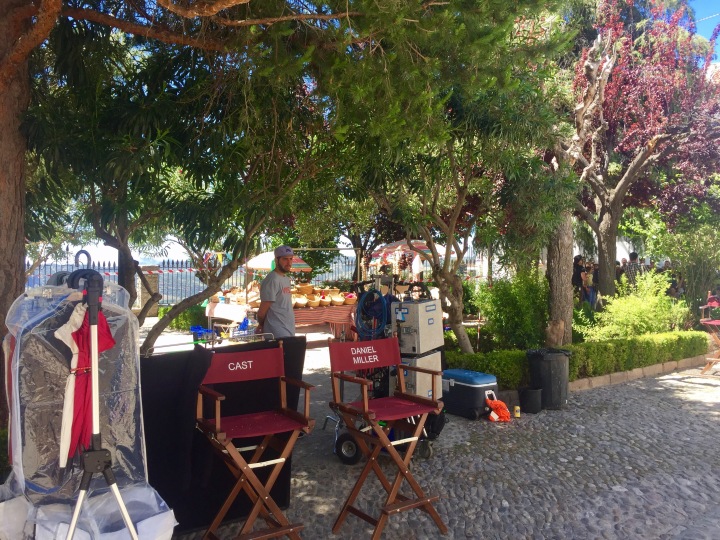