Paris was freed from Nazi occupation 75 years ago on August 25, 1944. The Germans took over Paris on June 14, 1940, leading to France’s signing an armistice with Germany and a puppet government’s establishment in France. Gen. Charles de Gaulle continued to lead the Free French in resistance to German rule. The French 2nd Armored Division, formed in London at the end of 1943, arrived in Normandy in August 1944, and on the 19th, the French Resistance began its uprising against the Germans. Gen. Jacques-Philippe Leclerc led the Armored Division into the city, reaching its center shortly before midnight on the 24th. By the morning of Aug. 25, 1944, Paris was free. 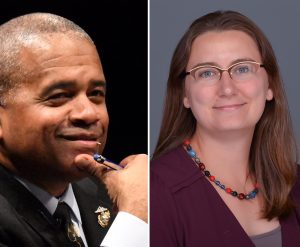 Two Hope history professors can expertly speak about this momentous day and its after-effects.

Dr. Fred Johnson III, associate professor of history, teaches about modern European history, U.S. military history, and the history of U.S. foreign policy. He can especially address America’s WWII strategic bombing campaign, the complexities and challenges of the Grand Alliance against the Axis powers, and the U.S.’s involvement in D-Day and the liberation of Europe.