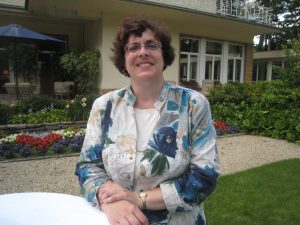 I am writing from Vienna, Austria, where we have just finished six weeks of May and June classes, and celebrated the sixtieth anniversary of the Hope College Vienna Summer School. I have spent my summers teaching in Vienna since 1998, under the directorship of my colleague, Professor Stephen Hemenway of the English Department. He has just finished his forty-first summer as the Director of the Summer School. The Vienna program was founded by the late Dr. Paul Fried, who was chair of the History Department for many years, and was Hope’s first Director of International Education. 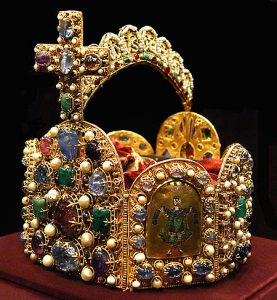 In Vienna, I teach the interdisciplinary humanities general education course, which combines history, philosophy, and literature. We focus on the theme of empire, and we take advantage of many of the cultural opportunities available in Vienna. Together, we visited Schönbrunn Palace, the imperial Habsburg tombs, the imperial treasury (where we saw the crown of the Holy Roman Empire, pictured here), and the Museum of Military History. Because this is the 100th anniversary of the death of the Emperor Franz Joseph, there were lots of chances to see exhibits focused on his life and times. 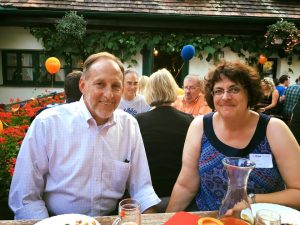 This past weekend, we had a wonderful celebration in the Vienna Woods, attended by this year’s Hope Vienna students, as well as alumni, family, and friends of Hope College. President John Knapp also joined us for the festivities. We had a lovely buffet dinner, with orange and blue decorations supplied by Board of Trustees member Brian Gibbs, who has also been a participant in the Vienna Summer School for more than thirty years.

I always enjoy teaching in Vienna because I can see students discover all kinds of things about European history and culture.

The opportunities in Vienna are rich and varied. In May, we all went to a German-language production of “Fiddler on the Roof,” (called “Anatevka” in German), which took on special significance in light of the current refugee crisis in Europe. For a few days in May, the regular routes of public transportation near our classrooms were disrupted because many world diplomats, including Secretary of State John Kerry, were meeting in a nearby hotel to discuss possible responses to the Syrian civil war.

When we visited Prague, we saw the memorial to the Bohemian nobles executed at the beginning of the Thirty Years’ War in the 1600s, as well as more modern sites associated with the life of Franz Kafka, whose work we read in class. Many of us attended a free, outdoor concert at Schönbrunn Palace by the Vienna Philharmonic.

Last week, we were shocked, as were people around the world, by the Brexit vote. Studying (and teaching) in Vienna gives all of us, I think, a more immediate sense of history, and of the importance of world events occurring right now. It always gives us pause to realize how much Austrians know about American history and politics (and how little we, in return, know about Austria, at least at the beginning of the summer.) We hope, by the end, that we all have a better sense of the history of our host country.

Studying (and teaching) in Vienna gives all of us, I think, a more immediate sense of history, and of the importance of world events occurring right now.

It’s a treat to introduce students to Vienna. I’m happy to be a part of Hope’s long-standing Vienna Summer School, and I’m looking forward to many more successful summers in Vienna.