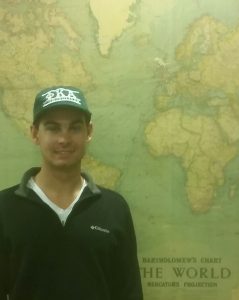 I came to Hope College to study history. As a freshman, I took a survey course in ancient history and learned how to write a paper as a history student in the history workshop. When I was signing up for my sophomore fall classes, I had the chance to take a course on the history of the modern Middle East with Professor Gibbs. I decided to take the course because I had not ever formally studied the Middle East and with the current news headlines of the day, I figured that knowing the history of the area would aid in my understanding of the conflict. After learning the history of the Middle East, I saw the course list for Spring 2016, and on it was a chance to put my knowledge to use in. I signed up for Hope’s Model Arab League class with Professor Awad knowing only that I would get to go to some sort of conference with the class, at some point in time. The class only met once a week on Tuesday nights and only took up a half semester, but it was a great time! In the class, we looked at the Middle East, and especially the country we would be representing in the conference, Lebanon. For most of the class time, we looked at the cultural, political, and general history of Lebanon and the greater Middle East. In class, we also took the time to practice the methods and procedures of the Model Arab League itself.  That meant going over the dialogues, line by line, that every country would have to go through to exercise motions and introduce resolutions to fellow delegations.

The day of the conference my fellow delegates and I headed out to Grand Rapids where the conference was to be held. When we arrived, we took our seat and were treated to one speaker attempt to defend Wahhabi Islam (the religion of Saudi Arabia), and another speaker discussed the details of the conference and the benefits Model Arab League provides to students. Over the course of three days, there were several planetary sessions, in which the different delegations discussed various matters pertaining to the different committees we were placed on. It was an awesome chance to put my historical knowledge to the test. I was able to defend Lebanon from other nefarious Gulf Coast countries that did not have our interests at heart. In doing so I received a distinguished delegate award from the conference from my efforts. The entire weekend was a blast at the Model Arab League, but it would not have been without the knowledge I gained from studying the Middle East.