One of the great joys for History faculty at the end of the year is attending Hope’s Celebration of Undergraduate Research and Creative Performance in DeVos Fieldhouse. This year was no exception. Six of us mentored a total of 15 majors, from first-years to seniors. The breadth of the projects was stunning, which speaks to the remarkable diversity of interests in the department’s majors.

Once again, History was the leading humanities department in terms of number of presenters.

Here are just a few highlights:

Professor Jeanne Petit led a team of four students who spent part of the summer in the Library of Congress and then several weeks on campus, analyzing America’s 1918 United War Work Campaign.

Feel free to click on the available links, and enjoy! 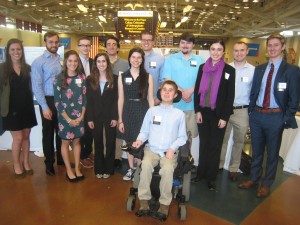