Coming out of a class one evening I got a text from my wife: “Guess what the answer was on Final Jeopardy.” I replied, “Since I don’t know what the question was, I can’t know the answer.” She couldn’t remember the exact wording but it had to do with letters written by a Roman and it mentioned the death of his uncle, so the answer had to be Pliny the Younger.

She knew this because she’s heard me talk about Pliny for years. He wrote almost 250 letters, including two famous ones that describe the eruption of Mt. Vesuvius in 79 AD, which covered Pompeii and Herculaneum. Pliny’s uncle, Pliny the Elder, died in that eruption. A later letter tells the emperor Trajan how Pliny dealt with Christians in the province of Bithynia (part of modern Turkey) in the year 112. It’s the earliest non-Christian source we have about the Christians.

I became interested in Pliny in seminary and graduate school, more years ago than I care to recall. I have used his letters extensively in my research and academic writing, especially in my book, Exploring the New Testament World. Somewhere along the way, I began playing with the idea of writing a historical mystery set in ancient Rome. The main question was who would be my detective. Several writers—Lindsey Davis, Steven Saylor, John Maddox Roberts and others—write Roman mystery series that use fictional characters as their investigators. The more I read Pliny, though, the more I realized he had the skeptical, analytical mind that would make a good detective.

So, just as in Final Jeopardy, Pliny was the answer for me.

I like punny titles. The phrase “All Roads Lead to Murder” struck me as appropriate for a Roman mystery novel. That meant I would need to set my first novel at a time in Pliny’s life when he was traveling. In the spring of 81 AD he was returning from a year of government service in Syria. I found a small publisher that was interested, and off we went. That publisher put out three Pliny novels before the owner died. I was fortunate to find another small publisher right away, and the series now runs to six books, with a seventh due out this year. 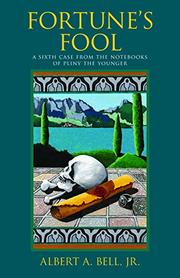 I’ve been gratified by critical comments about the books. Library Journal said the second in the series, The Blood of Caesar, was one of the 5 Best Mysteries of 2008, “a masterpiece of the historical mystery genre.” One reviewer of the sixth book, Fortune’s Fool, said, “Bell reinforces his place among those who are pushing the mystery beyond genre, toward the literary.” I thought I was just telling stories.

All of the Pliny books are available online, along with my contemporary fiction and a couple of non-fiction books.