While most American college freshmen prepare for their new life away from home by stocking up at Target, packing up the family car and driving a few hours away to a new U.S. city, Hope College junior Mitchel Achien’g (pronounced Me-Shell Aah-Ching) instead packed a couple suitcases, said her goodbyes and grabbed her passport for a 7,904-mile international flight, the first of many leaps of faith she would be taking into her future. 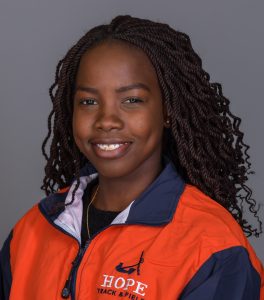 Achien’g’s story begins in Nairobi, the largest city and capital of Kenya, where she grew up. A Hope College admissions representative had stopped by to recruit in her school, Kisumu High School, and Achien’g liked what she heard. She came to Hope as a first-generation college student and an adventurer. Little did she know at the time that in just two years, she would set a school record on the Hope women’s track and field team.

Achien’g had been a field hockey athlete in high school. She had never tried track and field before or even considered it as a real possibility. Instead, when she got to Hope, Achien’g tried women’s lacrosse for the first time during her first fall. When spring rolled around, though, she received the unfortunate news that she had been cut from the team. The news was disheartening, but women’s lacrosse coach Kim Vincent offered Achien’g a new hope. Vincent recognized the freshman’s speed and athletic ability and encouraged her to try track and field.

When asked her thoughts on joining a new team and a new sport she had never played, Achien’g says, “At that point I didn’t really think that was an option. I never even thought about doing track. I just said forget about it at the time.”

It took Achien’g only three weeks of sitting idle to realize she was missing something very valuable in her life. She decided she had to keep moving so she joined the women’s track and field team and has been one of the top athletes for Hope ever since. 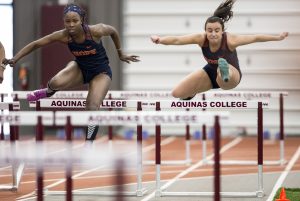 If it isn’t obvious already, Achien’g has a tendency to quite literally jump into new things and not look back. And she doesn’t just want to try something new; she is determined to work hard and shine at whatever she attempts. Coach Cole explains, “She has a lot of natural ability, but the biggest thing is she just wants to be good. She has a lot of desire to excel at everything she does and by everything, that’s pretty much everything. She sees a new event, and she wants to try it even if she’s not very good at it. When she starts out, she works at it until she gets good at it.”

When the 2019 MIAA Indoor Championship rolled around in February, Achien’g took yet another big leap, this time in the triple jump…for the first time. (Prior to that, she had been competing in sprints, hurdles and long and high jumps.) She wanted a new challenge, but mostly,  she was looking to help her team, to do anything within her athletic ability to secure a win for the Flying Dutch.

Since Achien’g was sure she could help, she approached Cole with this eager, determined and begging request. “I said, ‘Coach, just put me in the triple jump. I’m sure that in even my worst jump, I can at least earn a point for the school. I can do it.’” 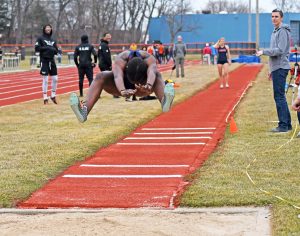 Resistant at first, Cole relented and gave the okay. Achien’g would go on to not only win the triple jump but she set an indoor school record of 35 feet, 3 1/4 inches. She was also named the MIAA’s Most Valuable Field Athlete at the league meet, and she tied the school record in the outdoor triple jump in March with a leap of 37 feet, 1 3/4 inches that matched Shaelie Harper’s 2010 Flying Dutch record.

Achien’g’s ability to set her mind to a task, no matter the newness or difficulty level including as an economics major working for the Association of Christian Economists this summer, has become an inspiration for the Hope track and field team. Close friend and teammate Emily Tyner explains, “I’ve found that she’s kind of like this solid rock for the team and knows what she’s doing at all times. She gives such great encouragement, so it’s just really comforting to have her around because you know she’s looking out for you.

Many others would agree with Tyner’s description of Achien’g. Now as she prepares to help the Hope women’s track and field team defend and recapture a league title at the MIAA championships hosted at Hope this week, Achien’g is ready to jump in feet first.