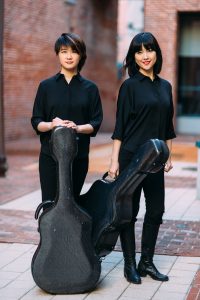 The acoustic guitar world is a demanding world. Precision is key, but heart is essential. A technically precise performance is expected, but if that is all you hear, you leave the concert impressed but unmoved. But when a performance combines technical skill with passion, you can walk away with a slightly altered worldview. Of course, this is the result of any great art which takes you into another realm and sends you back with a new way of seeing your world.

It can also be a solitary world for the guitarist, practicing for hours alone in preparation for those few hours in front of an audience. But for guitarists Meng Su and Yameng Wang, who make up the Beijing Guitar Duo performing here at Hope this Friday, those hours alone are supplemented by hours of working together. A solo guitar concert is a chance to watch an artist single handily fill the void, but a duo guitar concert is similar to watching a pas de deux in ballet. There are moments of individual soaring, but the guitarists are continually working around and with one another.

Wang and Su obviously love this guitar dance. Both come from the coastal city of Qingdao in China, and they each found early individual success. Before Su left high school, she had already won several international guitar competitions. Wang was the youngest winner ever of the Tokyo International Guitar Competition — when she was 12. Eventually, they both ended up in the U.S. studying in Baltimore with the legendary Manuel Barrueco. But despite their individual success, they continue to work together. 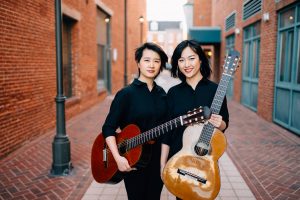 In addition to recording a CD with Barrueco himself, the duo’s other recordings have found great success. Their debut CD,  Maracaípe, received a Latin-GRAMMY nomination for the title piece, written specifically for them by Sergio Assad (who performed at Hope College with his brother in 1998). As a duo they have performed throughout Europe, Asia, and North America. This past season alone took them to countries such as Germany, Russia, Spain, Portugal, Denmark, Poland, China, Panama, and the United States.

Watch and listen to the Beijing Duo!

But for our audience, you only need to drive to the Jack H. Miller Center on the Hope College campus to be part of the Beijing Guitar Duo’s world. As with any performance, you get the chance to see the world with new vision.

Beijing Guitar Duo
Friday, Oct. 12 at 7:30 p.m.
John and Dede Recital Howard at the Jack H. Miller Center
Tickets are available online, at the Hope Ticket office in the Anderson-Werkman building (100 East 8th St.), or at the door on Friday.