Across his 27 years at Hope, the late Roger E. Davis of the music faculty helped guide the talent of hundreds of organists and vocalists.

Starting this fall, he will do so again through the custom instrument that he built for the studio in his 14th Street home, where he used it for rehearsal and master classes.  In storage since Davis’ death in January 1990, the organ is being reconstructed in the Robert Cavanaugh Choral Room in the Jack H. Miller Center for Musical Arts.

New generations of students will soon benefit from the talent of former long-time music professor Roger E. Davis, whose custom-built home-studio organ is being installed in the college’s choral rehearsal room.

“The intent of the organ is to accompany choirs in preparation for performances such as Vespers.  It will also be an instrument for student organ practice,” said Mark DeWitt ’87, who, in addition to being senior director of principal gifts at Hope, was one of Davis’s students.  “Also, the pedal board is comparable to many European instruments, which offers the students a contrast from the standard American Guild of Organists specification.”

Given to Hope by Davis’ friends and family, the organ is joining five other performance and rehearsal instruments at the college.  Its colleagues include the historic E.M. Skinner chancel organ in Dimnent Memorial Chapel; the Casavant concert organ in the Jack H. Miller Center for Musical Arts; the Dutch Pels and van Leeuwen organ in the chapel’s gallery; the J.W. Walker and Sons organ in the studio of Dr. Huw Lewis, professor of music and college organist since 1990; and one practice organ.

Davis, a professor of music who joined the faculty in 1963, enjoyed organ building and wood crafting as an avocation, and earlier in his career had spent two years working in pipe organ building and maintenance.  While at Hope, he spent many summers on pipe organ rebuilding and voice projects in several West Michigan churches, and was often called upon to serve as an organ consultant.  He based his own organ on the casework and pipes from an instrument by the Kilgen Organ Company, a U.S. firm that built many church and theatre organs during the 20th century. 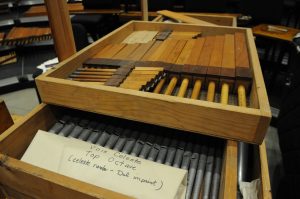 In addition to teaching organ and music theory, and serving as the college organist, Davis directed the College Chorus for 20 years, and for 10 years chaired and was program director of Christmas Vespers.  In 1971, he initiated Hope’s annual Tulip Time organ recital series, which continues to this day.  He had played a central role in the college’s acquisition of the Pels and Van Leeuwen organ, which was installed in the chapel in 1971. 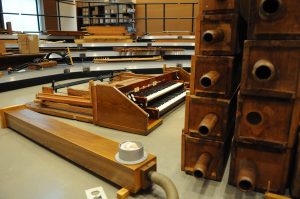 Davis was also an active recitalist, and performed in many churches in the Midwest.  His scholarly work included the textbook The Organist’s Manual.