The late Dr. Charles Aschbrenner, long-time professor of music at Hope, has left a lasting impression upon the college beyond his 53 years of teaching piano. Aschbrenner’s personal grand piano — a Steinway over 100 years old — now resides in the college’s presidential home, a gift given to Hope by his spouse Chris Spencer recently. Aschbrenner passed away in in September, 2016. 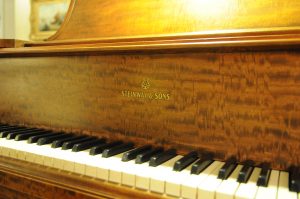 To celebrate its arrival to its new and permanent location, members of the Hope music department performed a dedication concert in the President House in Aschbrenner’s honor last week. The piano, both figuratively and literally, was the centerpiece of the event in the formal living room of the house. At 6-foot-11-inches, it is the second largest piano Steinway builds. Made of tiger, or flame, mahogany, the instrument took a year to construct and was completed in 1914. It first belonged to Aschbrenner’s mother from whom he received his first piano lessons.

Aschbrenner joined the Hope faculty in 1963 after receiving his master of music degree from Yale University. He further studied with renowned teachers Nadia Boulanger in France and Adele Marcus in New York City. But piano was not his only instrument. Aschbrenner also studied oboe with Ray Stills of the Chicago Symphony.

“An instrument is an extension of the musician. Sometimes we choose them and sometimes they cross our paths. This piano is very much an extension of Charles,” said Le. “It’s very generous. It’s warm and it’s delightful.”

While the warm and delightful Aschbrenner piano had a meaningful introduction to the president’s home — President Dennis Voskuil called the event one of the highlights of his time at Hope — it also has special significance for the new presidential residents moving in this summer. Sarah Dieter ’02 Scogin, wife of Hope’s next president Matthew A Scogin ’02, was a music performance major at Hope (as well as a computer science major).

Charles Aschbrenner was her mentor.

Listen to the Aschbrenner piano played by Dr. Andrew Le!